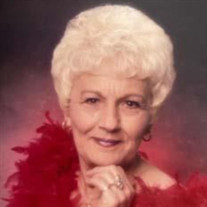 Margaret "Peggy" Ann Nichols, 82, of Charlotte, a woman of fierce Italian spirit and love of her family, died peacefully on Tuesday, March 8, 2022 in Charlotte. Peggy, 82, was born February 11, 1940 in the small town of Canton, PA, the daughter of Frank and Katherine (Keagle) Carrozza. She graduated High School in Canton in 1957 and left on a celebratory European cruise with her grandparents. While in Florence, Italy, she met a handsome young U.S. Army medic named Earl Nichols. The two reunited in Canton, PA and married on September 3, 1959. They soon moved to Texas, where they raised their family. Peggy worked as a beautician while Earl worked in trucking. They later returned to Pennsylvania, where they opened their own business, Machinery Transport Services Trucking Co. They co-operated the business for decades, in both Pennsylvania and Texas. Even in her final years in Charlotte, MI, she continued to have her hand in operations. Peggy's years in Texas led her to develop a passion for the Dallas Cowboys and Willie Nelson. In her spare time, she enjoyed knitting and cross-stitch, gardening, cooking and baking for her family and friends. Above all, she loved her family. Peggy is survived by her children, James (Tracie) Nichols of Eagle River, WI, Juli (Larry) Tkaczyk of Charlotte, and Gregory (Doreen) Nichols of Coppell, TX; grandchildren, Nicholas Tkaczyk, Andrew Tkaczyk, Austin Tkaczyk, Zacchary Nichols, Kaitlyn Nichols, Ian Nichols, and Landon Nichols; and her sister, E. Jane (Dr. Donald F.) Stanton of Lakewood Ranch, FL. She was predeceased by her husband, Earl Albert Nichols. Peggy’s family wishes to make a special thank-you to the staff of Sunshine Lane at Eaton County Medical Care Facility for their years of loving care for their mother. Friends are encouraged to support Peggy's family by attending services or sharing memories on her Tribute Page at www.prayfuneral.com. A private graveside will take place at a later date. If desired, the family suggests memorial contributions to any charity of one's choice. The family is in the care of Pray Funeral Home, Charlotte.

Margaret "Peggy" Ann Nichols, 82, of Charlotte, a woman of fierce Italian spirit and love of her family, died peacefully on Tuesday, March 8, 2022 in Charlotte. Peggy, 82, was born February 11, 1940 in the small town of Canton, PA, the daughter... View Obituary & Service Information

The family of Margaret "Peggy" Ann Nichols created this Life Tributes page to make it easy to share your memories.

Margaret &quot;Peggy&quot; Ann Nichols, 82, of Charlotte, a woman of fierce...

Send flowers to the Nichols family.