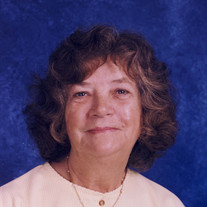 Marilyn Jean (Medcoff) Crittenden, a fiercely independent woman who wanted it "done right," died December 7, 2020 at the age of 85. Marilyn was born December 17, 1934 in Lansing, Michigan to Edward and Freda (Wolfe) Medcoff. She graduated from Charlotte High School in 1954 and then married her sweetheart William Critenden on July 31, 1954. Together they raised four children on their farm, and Marilyn became an active 4H leader. She loved learning new things and sharing with others, including crocheting, knitting (her family says she could make anything), and keeping her mind active by taking classes. She was a beloved teacher's aide at Galewood Elementary and other Charlotte schools for over 25 years before she retired. Marilyn is survived by her children Beverly (Patrick) Day, Pamela Cary, Gary (Diana) Crittenden, and Daniel Crittenden; 12 grandchildren, nine great-grandchildren; siblings Richard (Debbie) Medcoff, Lyle (Jean) Medcoff, and Tom Harshman; brother-in-law, Robert Buonodono; and many nieces and nephews. She was predeceased by her husband of 61 years, Bill; son-in-law, Michael Cary; siblings, Duane Medcoff, Phyllis Buonodono, and Robert Harshman; and her parents. A private graveside service will be held, and a public memorial will be held in Spring of 2021. If desired, contributions are suggested to Sparrow Hospice. Friends are encouraged to support the Crittenden family by sharing memories of Marilyn on her Tribute Page at www.PrayFuneral.com. The family is in the care of Pray Funeral Home, Charlotte.

The family of Marilyn Jean Crittenden created this Life Tributes page to make it easy to share your memories.

Send flowers to the Crittenden family.