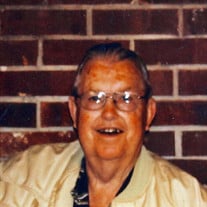 Marvin "Marv" Reinhold Ruff, 95 of Charlotte, a guy who loved breakfast and social time at "Wee Willies" restaurant, died September 2, 2020. Marvin was the son of Reinhold F. and Bertha (Scherbenske) Ruff, born near Lehr, North Dakota on February 4, 1925. He lived with his parents on a farm north of Lehr and attended a Logan County School. They moved into town in 1933, where Marv helped his father in the Standard Oil bulk business and service station. Several years later, he was named the youngest Standard Oil Bulk Agent in the history of Standard Oil of Indiana, which covered thirteen states. On October 15, 1950, Marv married Viola "Vi" Strehle in Medina, ND. They moved to Michigan where Marvin worked in the trucking industry. In 1984 he retired after 28 years as an automotive transport operator for Howard Sober, Inc. Marv and Vi enjoyed spending several winters in Florida in their fifth wheel camper. They also made several trips to North Dakota during the summer months. Marv enjoyed horse racing, motorcycles, gambling, and a nice shot of whiskey. Marv was preceded in death by his wife, Vi, in 2011; as well as his sister, Marlys Nickisch; and his parents. He is survived by his children, Desiree and Weston Ruff; granddaughter, Miranda (Chad Stalker) Bishop; and great-granddaughter, Myla Jane Stalker. Friends are encouraged to support Marv's family at visitation and funeral services. Mask and distancing guidelines will be practiced. Services are Tuesday, September 8, 2020 at Pray Funeral Home in Charlotte, with visitation from 12 noon to 1:00 PM and the funeral service at 1:00 PM with Pastor Charles Jenson officiating. The funeral service will be webcast so you may watch it from any computer, smartphone, or mobile device that has internet access. Go to www.prayfuneral.com, click on Marvin's tribute, and then click on Photos and Videos from your computer (or Media from your smart phone). Just prior to the beginning of the service, a link will appear on this page to watch the webcast. If desired, the family suggests memorial contributions to the American Cancer Society. Friends and family are encouraged to share memories of Marvin on his Tribute Page at www.PrayFuneral.com. The family is in the care of Pray Funeral Home, Charlotte.

The family of Marvin Reinhold Ruff created this Life Tributes page to make it easy to share your memories.

Marvin &quot;Marv&quot; Reinhold Ruff, 95 of Charlotte, a guy who loved...

Send flowers to the Ruff family.