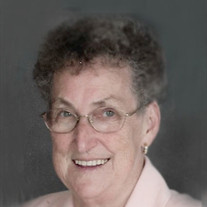 Mary Louise Hall, 86, of Charlotte was called to heaven by her Lord and Savior on September 6, 2020. She was born on April 26, 1934 to Lowell and Alice (Fuller) Boyer in Charlotte, Michigan. She attended Charlotte High School, graduating in 1951. On April 20, 1952 she married John Hall in Charlotte. Mary and her husband John loved to take their children camping. There were many fond memories of time spent in northern Michigan and winter trips with the Oldsmobile Outdoor Club. During those trips Mary loved to spend time playing games with the kids and sitting around the campfire. As her children grew and grandchildren came into the family Mary shifted her attention to being the best Grandmother. There were countless hours spent with her grandchildren. One of the grandkid's favorite activities were her BINGO games where, you guessed it, everybody won a prize! Mary held numerous positions in the business world of Charlotte. She started in a clerical position for Charlotte Insurance Agency as her children grew up and concluded her business career as a Real Estate Agent for Real Estate One. Along with her many hours in business she also became one of Charlotte's most prolific Avon representatives, taking orders until the recent days when she went into the hospital during her final illness. Her family assures her customers that the orders will be fulfilled, just as Mary would have expected! Mary was known to many as the community's favorite Mrs. Claus at Christmas time. She had a natural twinkle in her eyes that charmed many children in the community over the years. She was an avid community supporter, volunteering for numerous organizations and programs. If she became interested in a cause or project she became faithful to the cause and threw everything she had into supporting it. Her most notable community positions were as a long-term volunteer for Hayes Green Beach Memorial Hospital earning the HGB Volunteer of the year in 2019. She also earned accolades as the Modern Woodman's Hometown Hero in 2017. In 2003 Mary was honored as the Charlotte Frontier Days Grand Marshal. Mary was also active in the Charlotte Business Women's Guild, and Mobile Meals. When her children were growing up she volunteered as a leader for the Camp Fire program and Cub Scout's program. There were also numerous organizations she served as a board member. The most notable was the Camp Francis Board. Mary's children were always appreciative of the many hours she spent as a "Band Mom” supporting her many children in activities with the Charlotte Oriole Band. As a devoted Christian, Mary was an active member of her church, the Free Methodist Church of Charlotte. It was there, as a church nursery volunteer, that she earned the nick-name "Aunt Mary" to many families and youngsters. Mary also enjoyed serving as a church summer camp volunteer at Somerset Beach Campground. Above all, Mary was most proud of her family and her church. She will be remembered as a good steward who was compassionate, kind and forgiving. Mary is survived by her two daughters, Deborah (Michael) Wrubel, Alice Hurst; three sons, John Hall, William (Tamara) Hall, Dennis (Dawn) Hall; seven grandsons, Jeremiah (Tracey) Wrubel, Joshua Wrubel, Curtis (Amanda) Wrubel, Benjamin (Jessica) Hall, Christopher (Andrea) Harris, Kevin Joyce, Brad Joyce; eight granddaughters, Nicole Hall, Melissa (Jordan)Walraven, Sarah (David) Parks, Robin Huntington, Kellie Kridler, Christina Hall, Ericka Rodriguez, Amanda Hurst; twenty great-grandchildren with one more on the way; sister, Donna Thayer; sisters-in-law, Marie Chaplin and Jeanette Boyer; and many nieces and nephews. She was preceded in death by her husband, John Thomas Hall; father, Lowell Arthur Boyer; mother, Alice Louise Boyer; and her five brothers and sisters. Visitation for Mary will take place at Pray Funeral Home on Wednesday, September 9th from 2-4:00 PM and 6-8:00 PM. Due to current quarantine and sheltering guidelines Pray Funeral Home staff will guide guests to accommodate current social gathering guidelines. Masks will be required for guests and family. The Funeral service will be held outside in the Pray Gardens behind Pray Funeral Home at 11AM Thursday, September 10 with Pastor Greg Nitchman officiating. Social distanced seating will be provided and masks will be required for all family and guests. The funeral service will be webcast so you may watch it from any computer, smartphone, or mobile device that has internet access. Go to www.prayfuneral.com, click on Mary's tribute, then click on Photos & videos from your computer (or Media from your smart phone). Just prior to the beginning of the service, a link will appear on this page to watch the webcast. Friends and extended family members may send flower arrangements to the service as a show of your support for the family if you are unable to attend. If desired, the family suggests memorial contributions to Sparrow Eaton Hospital (Hayes Green Beach). Family and friends are encouraged to share remembrances and condolences online in Mary's Tribute Page at www.prayfuneral.com. The family is in the care of Pray Funeral Home, Charlotte, MI.

Mary Louise Hall, 86, of Charlotte was called to heaven by her Lord and Savior on September 6, 2020. She was born on April 26, 1934 to Lowell and Alice (Fuller) Boyer in Charlotte, Michigan. She attended Charlotte High School, graduating in... View Obituary & Service Information

The family of Mary Louise Hall created this Life Tributes page to make it easy to share your memories.

Mary Louise Hall, 86, of Charlotte was called to heaven by her...

Send flowers to the Hall family.