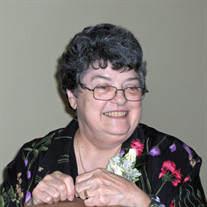 Mary Lee Tuckey of Lansing, Michigan and formerly of Charlotte, passed away on a memorable Leap Year Day, February 29, 2020. She spent her last hours in the presence of family and a very close friend Adla Lorimer. Mary Tuckey was born September 25, 1939 in Charlotte, Michigan, Eaton County to parents Zahn and Violet (Metternick) Tuckey. She graduated from Charlotte High School and attended two years at Ferris College. She worked alongside her father Zahn Tuckey at Tuckey’s Machine Shop as an office administrator until her father retired and sold the machine shop in 1972. Beloved Aunt Mary treated her nieces and nephews as if they were her own, baking cookies, cakes and candies and made surprise visits with her treats. She was an avid knitter and enjoyed needlepoint as it showed in her prized sweaters, socks, mittens, hats and scarves—also lovingly given to the family. Mary was devoted to her family—especially to her parents Violet and Zahn and she multi-tasked between preparing for Holiday dinners with her mother Violet in the kitchen to supporting father Zahn as he was also the Fire Marshall and fire fighter for the Charlotte Fire Department. She enjoyed sharing her rich family history and early days of the Bartlett and Bahr family resort in Northern Michigan and the Metternick family and spending time on the farm with grandparents. She also had fond memories of spending time at the family cabin in Baldwin. After her parents retired, the three of them travelled with the Holiday Rambler Club. She noted one of her most favorite trips was to the Porcupine Mountains. Mary worked at Paul’s Automotive until her career of 17 years at Michigan Manufacturers Association in Lansing. During this time she worked with a dear friend Adla. Adla and her husband Herb enjoyed many years together with Mary. Mary was an active member of the Eastern Star. She also made a difference in the lives of many children as she knit hats for newborn babies at Sparrow Hospital, volunteered at St. Lawrence Hospital and put her seamstress skills to work sewing dresses for a Haiti mission. When asked what her favorite teams were—two thumbs up for Michigan State Basketball and University of Michigan football. Mary Tuckey is preceded in death by her parents; brothers, Zahn Jr. (also known as “Tuckey”) and Joseph E. Tuckey; sister-in-law, Rachel (Van Dyk) Tuckey; sister-in-law, Lucille (Whitinger) Tuckey; nephews, Daniel Tuckey and Shane Wertz. She is survived by: Joel (Kathy), Kevin (Nancy), Phil (Stacey Banks), Brian (Ronda), Sue Tuckey, Sara Powers (Max), Julie Wertz, Steve, Robert and Ed (Carole.) She is also survived by 17 great nieces and nephews and 25 great-great nieces and nephews. A Celebration of Mary’s life will be held at a later date. In lieu of flowers the family suggests memorial contributions be made to the Grand Haven Manor Activities Fund at 3215 W. Mt Hope, Lansing, MI 48911. Friends and family are encouraged to share memories of Mary on her Tribute Page at www.PrayFuneral.com. The family is in the care of Pray Funeral Home, Charlotte.

Mary Lee Tuckey of Lansing, Michigan and formerly of Charlotte, passed away on a memorable Leap Year Day, February 29, 2020. She spent her last hours in the presence of family and a very close friend Adla Lorimer. Mary Tuckey was born September... View Obituary & Service Information

The family of Mary Lee Tuckey created this Life Tributes page to make it easy to share your memories.

Mary Lee Tuckey of Lansing, Michigan and formerly of Charlotte,...

Send flowers to the Tuckey family.