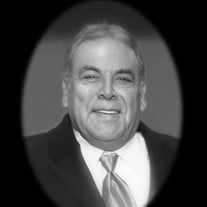 Matilde “Matt” R. Silvas, 79, of Charlotte, passed away on October 15, 2018. He was born on February 26, 1939, to Pedro and Felicitas (Rodriguez) Silvas in New Braunfels, Texas. His family of eleven moved to join the Rodriguez cousins who had made their home in Michigan. He married Linda Whitinger on July 29, 1961. Matt was fun, generous, happy, helpful and willing to help whenever and wherever he could. Matt and Linda’s family grew by 4, and each of those children had friends who thought of the Silvas house as their own. Their welcome sign was always visible, and the pair were thought of as Mom and Dad by many. There were multiple cousins on both sides of the families, and they meshed often for gatherings. Picnics, tug-of-war, annual Cedar Point trips, go to the lake trips. A carful and caravan was always the Silvas way of traveling. Matt was a hard worker from the moment he left school until he retired from Fisher-Body. He worked hard so he could play hard. He loved to golf, and he loved his Detroit Tigers. He installed a pool in their backyard so his family could swim, but more importantly so extended family and friends could come on over to swim and share a cookout. His love for his family, beginning with Linda has come first, then the children, and then he absolutely adored his grandchildren, great, and great-greats. He was the kind of papa/uncle who spoiled kids by not really meaning “no,” and no harm/no foul. He fiercely loved his family out loud, like a magnet to steel. Matt is survived by his wife, Linda; children, Jodie (Steve) Driver, Rob (Michelle) Silvas, Amy (Aaron) Sawatzki and Angel (Eric) Bartlett; grandchildren, Jennifer (Thomas) Hoffman, Kenny (Annalesha) Silvas, Todd (Sarell) Driver, Rikki (James) Shepherd, Randi Sawatzki, Rob (Kayla) McElhaney; great-grandchildren, Martina & Landon Hoffman, Devin and Drake Silvas, Aubrie and Kameron Driver, Madeline and Gemma Shepherd, Stevie and Raelynn Sawatzki, Ellie Mae McElhaney; and a great-great granddaughter on the way, Dylan Rae; siblings, Mary Cruz, Sid (Dora) Silvas, Pete (Maria) Silvas, Bruce Silvas, Jobie Moist; in-laws, Cruz Silvas, Teresa Silvas, Wilma Campbell, Leila Whitinger, John (Sue) Whitinger; countless extended family, and lovingly known as “Favorite Uncle Matt,” his many nieces and nephews would throw down to claim they were his favorite. Matt was predeceased by his parents; and brothers, Pedro, Juan, Frank, David; and life-long cousin and cherished friend, Joe Rodriquez, in-laws, Sherrie Silvas, Lucille Tuckey, Marion Whitinger, Norman Campbell. Memorial services will be held on Tuesday, October 23, 2018 11:00 AM at Pray Funeral Home in Charlotte, Visitation will be held Monday, October 22 from 5-8:00 PM at Pray Funeral Home. If desired, the family suggests memorial contributions to Alzheimer’s Association. Friends and family are encouraged to share memories and condolences on Matt’s Tribute Page at www.PrayFuneral.com. The family is in the care of Pray Funeral Home.

The family of Matilde R Silvas created this Life Tributes page to make it easy to share your memories.

Send flowers to the Silvas family.