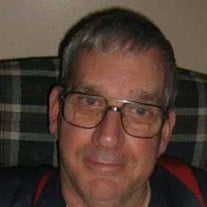 Max Lee Simpson, 81, of Charlotte, MI, an incredibly generous man who was always willing to help others, died January 9, 2022. Born September 25, 1940 in Charlotte, MI to Kenneth and Ethel (Boyer) Simpson, Max grew up on a farm and learned about hard work and the importance of family. In 1974 Max married Sandra Sherman. Together they enjoyed lots of quality family time, including “Rise and Shine” time to go cut wood, and Sunday nights watching Walt Disney shows. Max was quiet, until he wasn’t, but was never known to brag. Max worked at Williams Farm Machinery for 14 years, then became a partner in Fueslein Farm Machinery. Eventually Max started Simpson’s Performance building super stock tractors and components for customers around the country. An innovator in his field, Max always said, “I’m here to make horsepower,” and he did just that. Max became known throughout the country for his innovations for pulling tractors. One of those innovations was the Simpson Water Valve, which cools many of the 3000 horsepower engines on the pulling circuit. Max made most of the parts himself, as well as the necessary tooling. Max also served on the boards of the National Tractor Pulling Association, and the World Pulling International. The WPI/NTPA wrote “Max was a pioneer in the Super Stock division with his four-charger “Mean Ole Allis” A-C D21 and was integral to the success of diesel pulling teams in a myriad of divisions for decades. He won the 1981 and 1982 Grand National 7,500lb Super Stock championships before moving into an administrative role in his lifelong service to pulling as a member of the NTPA and WPI Executive Boards. He was inducted into the Pulling Hall of Fame in 2000.” Max enjoyed any time he could spend in the woods, whether it was cutting wood to heat their home, taking his family for rides in the Kawasaki Mule, or a fish fry and marshmallows by the campfire. He also spent many hours boiling sap over a wood fired evaporator to make the best maple syrup at Simpson’s Sugar Shack. When it came to any other machinery around the shop or farm there were always improvements Max would make…even if it was brand new. He also enjoyed travel with his wife Sandra. Some of his favorite times include trips to Sault Ste. Marie and anywhere near the ocean where he could watch the large ships. As his children grew and he became a grandpa, Max always tried to go to every event for the grandchildren, making up for the times he couldn’t be there for his children as they were growing up. Family meant the world to him. Max is survived by his wife of 47 years, Sandra; children, Greg (Pat) Simpson, Joy Simpson, Teresa Barnes, and Kevin Barnes; four grandchildren; seven great-grandchildren; brothers, Albert Simpson and Roy (Krys) Simpson; and sisters, Marvel Weers and Lois (Ken) Klumpp. He was preceded in death by his parents; brother, John, and his wife Phyllis Simpson; brother-in-law, Clifford Weers; and sister-in-law, Jaynne Simpson. Friends and family are encouraged to support Max’s family by attending services or sharing memories on his tribute page at www.prayfuneral.com. Visitation is Tuesday, January 18, 2022, from 2-4 p.m. and 6-8 p.m. Funeral services are Wednesday, January 19, 2022, at 11 a.m. at Pray Funeral Home, Charlotte, Mich. with Pastors Laurie Koivula and Bryce Feighner officiating. The funeral will be webcast so you may watch it from any computer, smartphone, or mobile device that has internet access. Go to www.prayfuneral.com, click on Max’s tribute, then click on Photos and Videos from your computer (or Media from your smart phone). Memorial contributions are suggested to NTPA Scholarship Fund or to Gresham United Methodist Church. The family is in the care of Pray Funeral Home.

Max Lee Simpson, 81, of Charlotte, MI, an incredibly generous man who was always willing to help others, died January 9, 2022. Born September 25, 1940 in Charlotte, MI to Kenneth and Ethel (Boyer) Simpson, Max grew up on a farm and learned... View Obituary & Service Information

The family of Max Lee Simpson created this Life Tributes page to make it easy to share your memories.

Send flowers to the Simpson family.