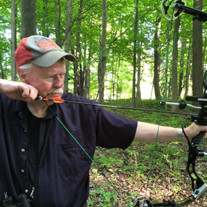 Michael William Lifford, known for his quiet, loyal and caring personality, passed away on Thursday, March 31, 2022. Michael, 73, of Dimondale, MI, was born to William and Betty (Beers) Lifford on July 4, 1948 in Lansing, MI. He married the love of his life Virginia Clark on September 14, 1968. A journeyman mold maker, he excelled as a manager for Franchino Mold and Engineering for 37 years. Michael had an obsession for competitive archery, a passion that he shared with his parents and his son. He was a multiple time State and National Archery Champion and the State MAA Shooter of the Year for many years. Michael used his archery skills in the outdoors bow hunting around the US. After his retirement from Franchino he started Lifford Archery which he operated in Dimondale and Potterville from 2003- 2016. He was capable of anything 'archery' and loved the challenge of fixing an unworkable bow or teaching the art of archery to youth. His passion led him to oversee the start of many youth archery programs. Beyond his love of archery he was also an avid motorcyclist. A family man, Michael adored spending quality time with his family. In so many ways Michael will be missed as he accomplished so much for others in his lifetime. Michael is survived by his wife, Virginia; children, Doug (Patty) Lifford; grandchildren, Rebecca (Zach) Ruddick, Emily Lifford, Joseph Khoury, Alyssa Khoury, Nathan Khoury; sister, Patricia (Rusty) Papendick; sister-in-law, Marijo Lifford. He was predeceased by his parents; daughter, Michelle Lifford Khoury; son-in-law, Frederick A. Khoury, and brother James Lifford. Friends are encouraged to support Michael's family by attending services or sharing memories on his Tribute Page at www.prayfuneral.com His family is planning visitation at Charlotte Assembly of God on Wednesday, April 6, 2022 at 9:30 a.m. to 11:00 a.m. The funeral service will follow at 11:00 am at the Charlotte Assembly of God Church on Charlotte, MI on Wednesday, April 6, 2022 at 11:00 a.m. Interment will be in Chapel Hill Cemetery Lansing. If desired, the family suggests memorial contributions to Capital Area Sportsman's League Archery Programs. Contributions may be made to the League online at https://casl-membership.square.site/ The family is in the care of Pray Funeral Home, Charlotte.

Michael William Lifford, known for his quiet, loyal and caring personality, passed away on Thursday, March 31, 2022. Michael, 73, of Dimondale, MI, was born to William and Betty (Beers) Lifford on July 4, 1948 in Lansing, MI. He married the... View Obituary & Service Information

The family of Michael William Lifford created this Life Tributes page to make it easy to share your memories.

Michael William Lifford, known for his quiet, loyal and caring...

Send flowers to the Lifford family.