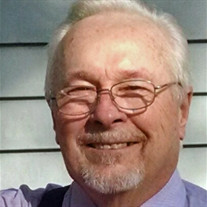 Michael John Sevenski, 72, a caring and humbling man of few words, died peacefully at home, surrounded by his family on Sunday, April 28, 2019, following a 9 year battle with cancer. Mike was born January 20, 1947, in Lansing, the son of Carl and Helen (Gawala) Sevenski. He graduated from Everett High School in 1965 before being drafted into the U.S. Army and serving as an Army Engineer during the Vietnam War. Following his honorable discharge, he worked final repair for General Motors, retiring in 2001. He served 3 years as the GM/Pontiac Representative for national auto shows. Mike married Sandy Keeler on February 25, 1967, and the two lived a life of love and happiness raising their 4 children. Mike and Sandy remained active at St. Mary Catholic Church in Charlotte throughout the years. Mike was one of the founders of St. Mary's St. Vincent DePaul Society and a member of the church Men's Club. Mike was known as "Huey," a nickname given to him from his childhood best-friend Mike (Horsehead) Olger. He enjoyed time spent with family and friends bowling, hunting, league softball, and trips to the casino. Mike coached hundreds of kids in youth leagues, and loved to make people laugh and had a soft spot for the less fortunate. He loved trips up north to the family property in Elmira, where he enjoyed tinkering out in the pole barn. Mike was the Duck Tape King, and was often quoted as saying, "If it can't be fixed, duck tape it." He loved and cared for animals, usually inheriting them from his children. Mike was proud of over 40 years of sobriety, and always served as an example of a strong work ethic. Above all, Mike lived a life of Faith, and loved his family. Mike is survived by his wife of 52 years, Sandy Sevenski; their children, Renee Sevenski, Michael John Sevenski II, Cami Sevenski, and Ryan (Dawn) Sevenski; he will be remembered as "Pa" by his grandchildren, Kelsey (Michael) Sailor, Konner Whitinger, Anna Marie Sevenski, and Steven Michael Sevenski; great-grandchildren, Michael and Ty Sailor; brother, Carl Sevenski; sisters, Sandra Eldred and Joyce (Larry) Cords; and brother-in-law, Arthur Montgomery. He was predeceased by his brother, Richard Sevenski; sister, Carlyne Montgomery; brother-in-law, Lyle Eldred; and nephew, Mark Montgomery. A Funeral Mass of Celebration will be held at 11:00 a.m. on Friday, May 3, 2019 at St. Mary Catholic Church with Rev. Fr. Dwight Ezop officiating. Visitation will be from 5:00 - 8:00 p.m. on Thursday, May 2, 2019, with an Affirmation Service beginning at 7:30 p.m., at the funeral home. Memorial donations may be made to St. Vincent DePaul of Charlotte or Hospice of Lansing, 3186 Pinetree Rd., Lansing, MI 48911 www.hopsiceoflansing.org . Friends and family are encouraged to share memories of Michael on his Tribute Page at www.PrayFuneral.com . The family is in the care of Pray Funeral Home, Charlotte.

Michael John Sevenski, 72, a caring and humbling man of few words, died peacefully at home, surrounded by his family on Sunday, April 28, 2019, following a 9 year battle with cancer. Mike was born January 20, 1947, in Lansing, the son of Carl... View Obituary & Service Information

The family of Michael John Sevenski created this Life Tributes page to make it easy to share your memories.

Send flowers to the Sevenski family.