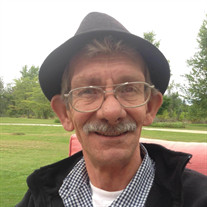 Mitchell Bruce Jenson, 64, of Lansing, formerly of Charlotte, went home to his Heavenly Father on Thursday, December 13, 2018 in Lansing after a brief illness. Mitch was born August 19, 1954, the son of Noel Arnold and Eileen Marie (Walch) Jenson. Mitch was employed at A/E Hoover from 1973-1988, Carefree Aluminum from 1992-1998, and 9 years at Spartan Motors, retiring in 2004 after an injury. Mitch enjoyed many things in life, including travelling, working in his garden, hunting for “one of a kind” treasures at yard sales, estate sales and Good Will. He was a great cook and made wonderful mac-and-cheese his family so enjoyed. He loved being a clown for 10 years, bringing joy to children and nursing home residents alike. Mitch was a Chairman for A.A. and helped so many in their struggles for sobriety. He was a lifetime member of the Charlotte Eagles and a 10 year member of the Charlotte Clown Club. He would give you the shirt off his back and helped those in need. Above all, Mitch was a man who had great love and compassion for his family and friends. Mitch is survived by his daughter; Sunrae (Royce) Hummel of Lake Odessa; sons, Jesse (Lindsay) Jenson of Lansing and Jimmy Chu; grandchildren, Jazlyn Jenson-Cook, Kiana Hummel, and Brodi Jenson; lifelong friend, Jimmy Truax of Lansing; brothers, Charles Jenson and Joe (Terri) Jenson, both of Charlotte; sisters, Cecil Jenson and Karen (LeRoy) Halliwill, both of Charlotte; brother-in-law, Blane White of Charlotte; Eugene “Hector” Hayes, known as “Dad;” several nieces and nephews; and his beloved dog, Ralph, who was his special companion. He was predeceased by his parents; brother, Neil Jenson and sister-in-law, Minnie Jenson; sister, Sharon White; and brother-in-law, Coy Cousins. Funeral services will be held at 2:00 p.m. on Wednesday, December 19, 2018 at Pray Funeral Home with Marty Garn officiating. Visitation will be from 2:00 – 4:00 and 6:00 – 8:00 p.m. on Tuesday, December 18, 2018 at the funeral home. Interment will take place in Maple Hill Cemetery. If desired, the family suggests memorial contributions to the Ingham County Humane Society. Friends and family are encouraged to share memories of Mitch on his Tribute Page at www.PrayFuneral.com. The family is in the care of Pray Funeral Home, Charlotte.

Mitchell Bruce Jenson, 64, of Lansing, formerly of Charlotte, went home to his Heavenly Father on Thursday, December 13, 2018 in Lansing after a brief illness. Mitch was born August 19, 1954, the son of Noel Arnold and Eileen Marie (Walch)... View Obituary & Service Information

The family of Mitchell Bruce Jenson created this Life Tributes page to make it easy to share your memories.

Send flowers to the Jenson family.