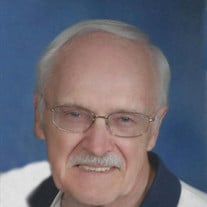 Norman "Norm" Merrill Francis, a man who dedicated his life to educating children, died peacefully on Sunday, May 30, 2021. Norm was born September 7, 1934, in New York, the son of Carlton and Daisy Francis. After proudly earning a Master's Degree in Special Education, Norm began his career, he worked for the Eaton Intermediate School District, the State of Michigan, and after retirement as a realtor and helping people with their taxes. Norm was a man who enjoyed staying busy. Over his career Norm earned numerous awards for his dedication to his profession. After retiring he began volunteering on the Barry County Board of Mental health. Outside of work Norm was a very loving, joyful, understanding, prankster, father, grandfather, significant other, and friend. He was always willing to help people in need. Norm had a passion for his convertibles, he loved going for rides around town. He also enjoyed playing cards, camping, enjoying his home on Algonquin Lake, and traveling with his significant other Beverley throughout the United States. The couple wintered in the Sarasota area in Florida, where they created a large network of friends. Above all Norm will be remembered for his love for his family and his profession. Norm is survived by his significant other, Beverley Black; children, Chris (Danielle) Francis, Mark (Renee) Francis, Raymond Francis, Diane (Paul) Mapes, Travis (Jennifer) Black; 10 grandchildren; brother, Gilbert Francis. He was predeceased by his wife, Janet Francis; brother, Duane Francis; and his parents. Friends are encouraged to support Norm's family. Funeral services are Friday, June 11, 2021 at 2:00 p.m. at the Pray Funeral Home Gardens in Charlotte with Reverend Raymond Francis officiating. Visitation is Thursday, June 10, 2021, from 6-8:00 p.m. at Pray Funeral Home. Mask, group capacity, and distancing guidelines will be practiced. The funeral will be webcast so you may watch it from any computer, smartphone, or mobile device that has internet access. Go to www.prayfuneral.com, click on Norm's tribute, then click on Photos and Videos from your computer (or Media from your smart phone). If desired, the family suggests memorial contributions to St. Jude Children's Research Hospital. Friends and family are encouraged to share memories of Norm on his Tribute Page at www.PrayFuneral.com. The family is in the care of Pray Funeral Home, Charlotte.

Norman "Norm" Merrill Francis, a man who dedicated his life to educating children, died peacefully on Sunday, May 30, 2021. Norm was born September 7, 1934, in New York, the son of Carlton and Daisy Francis. After proudly earning a Master's... View Obituary & Service Information

The family of Norman Merrill Francis created this Life Tributes page to make it easy to share your memories.

Norman &quot;Norm&quot; Merrill Francis, a man who dedicated his life to...

Send flowers to the Francis family.