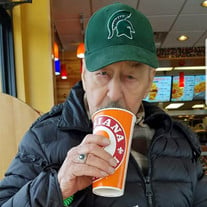 Paul Junior Makley, 82, of Olivet, a man who enjoyed many outdoor activities, died peacefully on February 14, 2019. Born March 27, 1936 in Detroit to Carl and Melba (Strieter) Makley. He married Dolores Wheeler on July 17, 1954 in Angola, IN, and they raised four daughters together. A great story-teller, Paul loved to embellish his adventures, which went well with his hobbies of hunting, fishing, and golf. Paul was a union construction man for 23 years, self-employed construction for 6 years, and most recently worked for the State of Michigan Department of Public Health for 26 years until his retirement in 1996. Paul is survived by his daughters, Christine (Joe) Anderson, Kathleen (Steve) Hoard, Karen (Carlie) Dickie, and Connie (John) Stark; grandchildren; great-grandchildren; and brother, Kenneth (Nancy) Makley. He was preceded in death by his beloved wife, Dolores; brother, Fred Makley; and his parents. Friends are encouraged to support the Makley family at visitation and funeral services. Funeral services are Monday, February 18, at 10:00 a.m. at Pray Funeral Home in Charlotte with Pastor Jack Brown officiating. Visitation is Sunday, February 17, from 2-4:00 p.m. and 6-8:00 p.m. If desired, the family suggests memorial contributions to The Olivet Lions Club. Friends and family are encouraged to share memories of Paul on his Tribute Page at www.PrayFuneral.com. The family is in the care of Pray Funeral Home, Charlotte.

The family of Paul J. Makley created this Life Tributes page to make it easy to share your memories.

Paul Junior Makley, 82, of Olivet, a man who enjoyed many outdoor...

Send flowers to the Makley family.