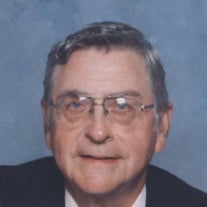 Our loving husband, father, grandfather and great grandfather, Ray Hackworth, went to be with his heavenly Father on September 26, 2020. Ray was born December 26, 1934 to Johnnie and Effie (Williams) Hackworth in Kentucky. Ray loved his family, friends and church family. He served his country in the U.S. Army from 1958-1959 in the Signal Corp. After returning from the service he worked as an electrician for 30 years at General Motors until his retirement in 1985. While working at General Motors Ray also owned and operated a grocery store and laundromat in Potterville. He never had just one job. After his GM retirement he became a financial advisor for Waddell-Reed, a Real Estate agent, and managed several rental properties until 2019. Ray also enjoyed maintaining their beautiful property surrounding their residence which included a large pond and garden where many family gatherings and celebrations were held. Ray liked planting and watching sunflowers grow taller than him, riding his tractor and four-wheeler, and following the stock market. In the winter, he and Joan spent time at their Florida seasonal home where he loved the warmth of the sun Ray was married for 61 years to his wife Joan (Collins). Ray and Joan were blessed with 5 loving children; Beverly (Ed) Lira, Cheri (Jeff) Elston, Annette Robinson, Dana Converse and Eric Hackworth; three grandsons, Nathan Robinson, and Joel and Jared Converse; Seven granddaughters, Ashley (Matt) Carpp, Elizabeth (Brian) Colopy, Faye (Jacob) VanSickle, Jana Converse, Rachael (Rob) Dulebon, Madison and Makayla Lira; two great grandsons, and five great granddaughters. Ray is also survived by his sister Sharon (Aaron) Collins and brother Bob (Dee) Hackworth, many in-laws, nieces and nephews. Ray always wanted everyone in his family to succeed and was always there to provide his words of wisdom and advice. We will miss him dearly but know he is surrounded by his loving parents, friends and Heavenly Father. We are comforted knowing that we will be together again. The Hackworth family will be receiving guests during visitation Monday 6-8 PM at the Pray Funeral Home. Funeral services will be Tuesday September 29, at 10 AM in the Pray Funeral Home Gardens with John Coakley officiating. In recognition of the Executive Orders for the State of Michigan Mask and Social Distancing guidelines will be practiced both indoors and outdoors. If desired, the family suggests memorial contributions to Church of Jesus Christ of Latter-Day Saints. The funeral service will be webcast so you may watch it from any computer, smartphone, or mobile device that has internet access. Go to www.prayfuneral.com, click on Ray's tribute, and then click on Photos and Videos from your computer (or Media from your smart phone). Just prior to the beginning of the service, a link will appear on this page to watch the webcast.

Our loving husband, father, grandfather and great grandfather, Ray Hackworth, went to be with his heavenly Father on September 26, 2020. Ray was born December 26, 1934 to Johnnie and Effie (Williams) Hackworth in Kentucky. Ray loved his family,... View Obituary & Service Information

The family of Ray R Hackworth created this Life Tributes page to make it easy to share your memories.

Send flowers to the Hackworth family.