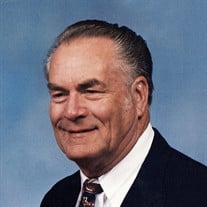 Rex Arnold Fredline, a man who loved his John Deere tractors, died September 13, 2019 at the age of 90. Rex was born on the family farm in Carmel Township on the 4th of July, 1929, to Oscar and Margaret (Tiedgen) Fredline. He graduated from Charlotte High School, in 1948. Rex served in the United States Air Force, serving 1948-1952, then in the National Guard until 1957. On January 30, 1953 he married Yvonne (Bonnie) Martin, and together they raised a family with lots of love and humor. Rex provided for his family, holding many jobs over the years, including Chrysler Body, gas stations, tree trimmer, Fisher Body, AE Hoover, Howard Sober, Central Transport, and Fleet Carrier. He spent 30 years driving a truck retiring in 1989. He enjoyed his job as a truck driver, traveling all over the United States and received a Safe driver award. His favorite hobby was cleaning up and restoring old John Deere tractors. He was also a member of the 2-cylinder club for John Deere owners. He enjoyed crossword puzzles, reading Louie L'Amour westerns, and traveling to see the country. He was a member of the Optimist Club, VFW Post 2406, golf league at Olivet Country Club, and greatly enjoyed participating in parades with his John Deere tractors. Rex will always be remembered for his good sense of humor and his big heart. Rex is survived by his daughter, Debra (Terry) Marquardt; grandsons, Trevor Marquardt, Jonathan (Whitney) Hodges, Derek (Kelsey) Marquardt, and Curtis (Amanda) Marquardt; great-grandchildren Beckett and Kassidy Marquardt; brother Wayne (Marcia) Fredline. He was predeceased by his wife, Yvonne in 2016; son, Robert in 2019; and his parents. Friends are encouraged to support the Fredline family at visitation Sunday, September 15, 2019, 2-4:00 PM and 6-8:00 PM and funeral services are Monday, September 16, 11:00 AM at Pray Funeral Home in Charlotte with Rev Charles Jenson officiating. Friends and family are asked to share memories of Rex on his Tribute Page at www.PrayFuneral.com.

Rex Arnold Fredline, a man who loved his John Deere tractors, died September 13, 2019 at the age of 90. Rex was born on the family farm in Carmel Township on the 4th of July, 1929, to Oscar and Margaret (Tiedgen) Fredline. He graduated from... View Obituary & Service Information

The family of Rex Arnold Fredline created this Life Tributes page to make it easy to share your memories.

Send flowers to the Fredline family.