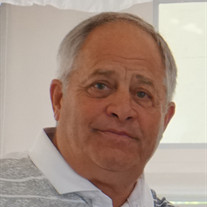 Richard Alan Lindsay, 66 of Charlotte, a selfless and joyful man, passed away unexpectedly on July 27, 2021. He was born in St. Johns, Michigan on February 25, 1955, the son of Louis and Agatha (Feldpausch) Epkey. One of Rich's proudest accomplishments was being a loving husband, father, and grandfather. Thoughtful, generous, and devoted, Rich had a heart filled with compassion. He often spent his spare time helping others, doing yardwork or just lending a listening ear. It didn't matter if you were a stranger; Rich was a friend to everyone. He had the amazing ability to bring out the best in those around him. He constantly filled others with words of encouragement and truly loved to see other people succeed. Rich proudly served in the U.S. Air Force. Rich worked for Michigan Veterinary and Farm Supply as a salesman for over 25 years, retiring in 2011. He also managed numerous rental properties around Charlotte. An avid sportsman, Rich loved to play golf and most recently won the First Baptist Church golf league. He enjoyed playing on multiple golf, pickle ball, tennis, and softball leagues where he formed many lifelong friendships. All who knew Rich knew he loved to compete, but he also had the amazing ability to make everyone playing feel believed in and valued. This held especially true for his family, he never missed a chance to support his children and grandchildren at all of their events. Rich married the love of his life, Joan Lindsay, on March 10, 1990 at the First Baptist Church in Charlotte where he was an active member of the church. Together they raised four wonderful children. Rich's adoration for his wife was evident to all who knew him. He made sure Joany, as he affectionately called her, knew she was supported and loved beyond measure. A Godly man, strong in his belief and willing to help all those who crossed his path, he lived by, Romans 12:10, "Be devoted to one another in love. Honor one another above yourselves". Rich's enthusiastic personality and outlook on life will be missed by all that met him especially his family. Rich was preceded in death by his parents, Louis and Agatha Epkey; and sister, Mary (Dave) Kaiser. He is survived by his loving wife, Joan; daughters, Jaime (Casey) DeMott of Charlotte and Carrie (Michael) Pendell of Dewitt, sons, Logan (Abby) Lindsay of Dexter and Lucas Lindsay of Charlotte; six beautiful grandchildren; and siblings, Fred (Linda) Epkey of Fowler, MI, Kathy (Randy) Simmons of Crystal Lake, MI, Lois Libiran of Plainwell, MI, John (Patty) Epkey of Indianapolis, IN, Christine (Carlos) Libiran of Mason, MI, Charlie (Theresa) Epkey of Post Falls, ID, and Dorothea (John) Sullivan of Elmira, OR. Friends are encouraged to support Rich's family by attending the memorial service, which is being held at the First Baptist Church in Charlotte on Friday, August 6, 2021 at 1:00 pm. Memories can also be shared on his Tribute Page at www.prayfuneral.com. If desired, Rich's family encourages others to do as Rich would do and give their time to helping others. The family is in the care of Pray Funeral Home, Charlotte.

Richard Alan Lindsay, 66 of Charlotte, a selfless and joyful man, passed away unexpectedly on July 27, 2021. He was born in St. Johns, Michigan on February 25, 1955, the son of Louis and Agatha (Feldpausch) Epkey. One of Rich's proudest accomplishments... View Obituary & Service Information

The family of Richard Alan Lindsay created this Life Tributes page to make it easy to share your memories.

Richard Alan Lindsay, 66 of Charlotte, a selfless and joyful...

Send flowers to the Lindsay family.