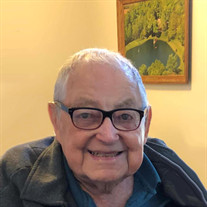 Richard L. Schneckenberger, a hard-working, kind man loved by all, died peacefully at his home with his two daughters at his side on October 5th, 2020. Dick, 93, of Charlotte, was born May 2, 1927 in Charlotte, the son of Ray and Ruth (Crozier) Schneckenberger. Dick farmed with his uncle, Carol Elliott, whom he lived with after his mother passed away when he was 13 years old. During his High School years, along with farming, he played 4 years of football and was an avid hunter. Before graduation in 1945, he enlisted in the U.S. Navy and was called to serve aboard the USS Sable during WWII. After a medical discharge he then worked for the Navy as an Armored Guard transporting the payroll in Chicago. Dick married the love of his life, Mary Lou Terwilliger, on July 31, 1949. He then hired into Fisher Body GM in 1950 where he continued to work and retired after 37 years as a General Forman and Supervisor. Dick enjoyed an active life with family and friends of camping, waterskiing, go carts, horse showing and hunting. A highlight of his life was not only being a member and President, but helping to establish the Eaton County Sheriff Department Mounted Division (Sheriff Posse). Dick is survived by his 3 children, Patti Wright, Mike (Carol) Schneckenberger and Nancy (Kevin) Fullerton; grandchildren, Summer (Vinni) Ingalls, Kalyn Schneckenberger, Sonny (Jeff) Grendel, Ryan Schneckenberger and Tyger (Caitlyn) Fullerton; great-grandchildren, Katie Spotts, Shelby Ingalls, Wyatt Ingalls, Brogan Fullerton, Charley Grendel and Brynlee Fullerton; great-great-grandchildren, Raven and Hazel Siefert; brother-in-law, Wayne (Lin) Terwilliger; niece and nephew, Marcie and Steve Terwilliger; and his beloved dog, Max. He was preceded in death by his parents; his wife of 68 years, Mary Lou; infant son, Richard Mikell Schneckenberger; and grandson, Nicholas Michael Spotts. Friends are encouraged to honor Dick by attending his Funeral Service at 1:00 pm on Saturday, October 10, 2020 in the Pray Funeral Home Gardens. Visitation will be prior to the service from 11:00 am to 1:00 pm, also in the garden. Mask and distancing guidelines will be practiced. If desired, the family suggests memorial contributions to the Charlotte Volunteer Fire Department. Friends and family are encouraged to share memories of Dick on his Tribute Page at www.PrayFuneral.com. The family is in the care of Pray Funeral Home, Charlotte.

Richard L. Schneckenberger, a hard-working, kind man loved by all, died peacefully at his home with his two daughters at his side on October 5th, 2020. Dick, 93, of Charlotte, was born May 2, 1927 in Charlotte, the son of Ray and Ruth (Crozier)... View Obituary & Service Information

The family of Richard LaRue Schneckenberger created this Life Tributes page to make it easy to share your memories.

Send flowers to the Schneckenberger family.