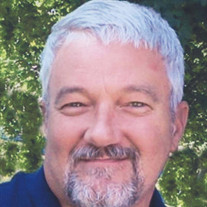 Richard Lynn Vance, 65 of Dimondale, passed away exactly one month after his wife Kathy on June 26, 2021 after a short battle with brain cancer. Richard was born August 3, 1955 to Jon Vance and Elanor Westphal in Brighton, Michigan. Richard went to work at Auto Owners Insurance Company right after he graduated from Lansing Eastern High School in 1973. He was a hard worker and instilled that trait into his children. For many years Richard was very active in adult softball leagues and played for the Auto Owners Insurance Company team. He was also a lifelong bowler playing in numerous area leagues, and he was very good. His children and grandchildren were his main focus throughout his life and he supported them by attending all their ballgames, recitals and concerts. He often said “They make me as proud as I can be.” Not only did he love his family but also was devoted to his pets. After 44 years at Auto Owners he retired as an auditor and he traded a suit and tie for a set of motorcycle leathers and made his longtime dream a reality when he bought a Harley. He became a member of the Lansing area Harley Owners Club ( H.O.G.S) and recently became it’s Director. He married Kathy Semrau on April 7, 2017 and together they traveled all around the country on his Harley for the last 5 years. He and Kathy were active with all their common interests and packed so much into the few short years that they were together. Richard is survived by his daughter, Christi (Don) Grinnell; son, Jason (Trisha) Vance; step sons, Tucker (Michelle) Fuller, Dalton (Karin) Fuller; Grandchildren, Hunter, Madelyn, Christine, Trason and Benjamin; sisters, Elaine (Dan) Cupp of Eaton Rapids and Eva (Joe) Hay of Bangor and many nieces and nephews. He was predeceased by his wife Kathy, in May; his parents; his brother Ron (2020). Friends are encouraged to support Richard’s family during the visitation on Thursday, July 1, 2021 from 3-6 pm. A public memorial service will be held Saturday, July 31st at 3 pm in the Pray Gardens with interment following in Eastlawn Memorial Gardens in Okemos with the procession led by the H.O.G.S. Friends and family are encouraged to share memories of Richard on his Tribute Page at www.PrayFuneral.com. The family is in the care of Pray Funeral Home, Charlotte.

Richard Lynn Vance, 65 of Dimondale, passed away exactly one month after his wife Kathy on June 26, 2021 after a short battle with brain cancer. Richard was born August 3, 1955 to Jon Vance and Elanor Westphal in Brighton, Michigan. Richard... View Obituary & Service Information

The family of Richard Lynn Vance created this Life Tributes page to make it easy to share your memories.

Richard Lynn Vance, 65 of Dimondale, passed away exactly one...

Send flowers to the Vance family.