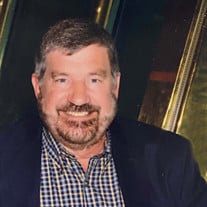 Robert "Bob" Lynn Hanje, 65, of Charlotte, a loving and wise father and grandfather with a servant-heart, went home to be with the Lord on Monday, April 19, 2021 in Lansing. Bob was born October 17, 1955 in Indianapolis, IN, the son of Arthur "Ralph" and Lois Elaine (Lutton) Hanje. Following high school, Bob attended the General Motors Institute in Flint before returning to Indianapolis to start his career in engineering. Soon after, he earned a Master's Degree in Engineering from Purdue University. He then moved to the General Motors Plant in Mansfield, OH, where he met the love of his life, Coral Jo Armstrong. The two married on January 17, 1987, started their family, and eventually moved to Charlotte, MI, when Bob took the position as launch manager at the Cadillac Plant in Lansing. Following his retirement, Bob devoted much of his working hours to the service of those with special needs as a bus driver for both Dean Transportation and South Church Chosen Ministry, as well as serving at Camp Barakel. Above all, Bob was devoted to his family and his Faith. He was an active member of South Church in Lansing, and was known to give of himself freely to others. Bob was always present with his children and grandchildren. Despite working long hours at GM, he was present and deeply involved with his children and grandchildren, whether it be homework, sporting events, or family vacations. He enjoyed time spent with family in the outdoors, especially waterskiing, sailing, and practicing the art of photography. Many will remember Bob's famous homemade ice cream, which he shared with all who knew and loved him. Bob is survived by his wife of 34 years, Coral Hanje; daughter, Brittany (Scott) Mathewson; sons, Justin (Alyssa) Hanje and Jonathan (Emily) Hanje; grandchildren, Jessa, Riley, and Eli Hanje, and Ella and Theodore "Teddy" Mathewson; mother, Lois Kennedy; brother, Charles (Joy) Hanje; and several nieces and nephews. He was predeceased by his father, Arthur Hanje and his brother, Marc Hanje. Friends are encouraged to support Robert's family by attending services or sharing memories on his Tribute Page at www.prayfuneral.com. Visitation will be at South Church in Lansing on Thursday, April 22, 2021 from 2:00 - 4:00 and 6:00 - 8:00 p.m. Funeral services will be at 11:00 a.m. on Saturday, April 24, 2021 at South Church with Pastor Don Denyes officiating. Interment will take place in Lexington Cemetery in Lexington, OH. Mask, group capacity, and distancing guidelines will be practiced. Throughout their lives together, both Bob and Coral supported the Samaritan's Purse Christian Charity, and encourage those wishing to make a donation in Bob's memory to do so at www.samaritanspurse.org. If desired, the family suggests memorial contributions to Samaritan's Purse. The family is in the care of Pray Funeral Home, Charlotte. The funeral service on Saturday may be viewed via webcast at southlife.org/funeral.

Robert "Bob" Lynn Hanje, 65, of Charlotte, a loving and wise father and grandfather with a servant-heart, went home to be with the Lord on Monday, April 19, 2021 in Lansing. Bob was born October 17, 1955 in Indianapolis, IN, the son of Arthur... View Obituary & Service Information

The family of Robert Lynn Hanje created this Life Tributes page to make it easy to share your memories.

Send flowers to the Hanje family.