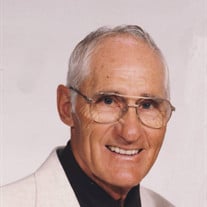 Robert Karl Joppie, 89, of Charlotte, died peacefully on Monday, October 1, 2018. Robert was born February 3, 1929, the son of Henry and Dorthea Joppie in Sunfield Twp. He graduated from Charlotte High School in 1946 and started a career at Fisher Body Division of General Motors as a Millwright, retiring after 43 years. Robert married the love of his life, Frances Eleanor Gould, on October 21, 1950. Robert was an incredible father to his three children. He had a huge appreciation of nature and time spent in the outdoors. He enjoyed a happy retirement filled with various hobbies, including hunting, fishing, snowmobiling, camping and meticulous lawn care and gardening. He also enjoyed watching Detroit Tigers Baseball. Robert and Frances enjoyed years of travel throughout the United States. Robert spent a lot of his time helping his family and others, along with being a generous blood donor and a longtime supporter of Paralyzed Veterans and the American Lung Association. Robert was a phenomenal grandpa and spent many years attending his granddaughters' special event and activities. He lived a very full life doing what he enjoyed, around the people he loved most and was always giving of himself. Robert is survived by his son, James (Delsa) Joppie; daughter, Angela (Greg) Parker; daughter-in-law, Diana Joppie; granddaughters, Lauren (Brian) St. John and Grace (Evan) Boehmer; great-grandchildren, Everett and Faith St. John, and soon to be Belle Boehmer; sister, Phyllis (Emery) Fenstemaker; and his special friend and companion, sister-in-law, Evelyn Joppie. He was predeceased by his wife, Frances; son, John Joppie; brothers, Russell Joppie and Earl Joppie; and sister, Maxine Harag. Friends are encouraged to support Robert's family at visitation and funeral services. Funeral services will be at 11:00 a.m. on Friday, October 5, 2018 at Pray Funeral Home in Charlotte with Pastor Charles Jenson officiating. Visitation will be from 6:00 - 8:00 p.m. on Thursday, October 4, 2018 at the funeral home, and one hour prior to the service. If desired, the family suggests memorial contributions to the Alzheimer's Association, Michigan Great Lakes Chapter. Friends and family are encouraged to share memories of Robert on his Tribute Page at www.PrayFuneral.com. The family is in the care of Pray Funeral Home, Charlotte.

Robert Karl Joppie, 89, of Charlotte, died peacefully on Monday, October 1, 2018. Robert was born February 3, 1929, the son of Henry and Dorthea Joppie in Sunfield Twp. He graduated from Charlotte High School in 1946 and started a career at... View Obituary & Service Information

The family of Robert Karl Joppie created this Life Tributes page to make it easy to share your memories.

Send flowers to the Joppie family.