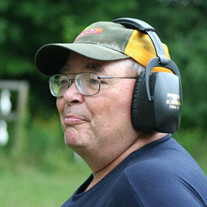 Roger L. Corey, a quiet and gentle man that silently supported the Village of Vermontville in many ways, died February 3, 2020 at the age of 65. Roger was born June 3, 1954 in Charlotte to Marion and Flossie (Case) Corey, and lived his entire life in Vermontville. A graduate of Maple Valley High School in 1972, Roger had a real love for his community and did many things throughout his life to support his hometown, always behind the scenes and with no fanfare or recognition of his contributions. He spent many years as a volunteer for the Vermontville Fire Department. His real passion, however, was the baseball diamond at Maplewood school, used by the Maple Valley High School. Roger single-handedly made sure the field was meticulously cared for, mowing it himself every week, caring for the field before and after games, ensuring that a sprinkler system was installed so the grass was fantastic, and organizing and helping build a press box. Hundreds of young baseball and softball players enjoyed this field over the years. Roger worked for the United States Postal Service for 33 years as a rural carrier in Bellevue until his retirement in 2009. At home, he enjoyed an extensive collection of Coca Cola memorabilia, and had a love for trains, old tractors, and several beloved cats over the years. He loved to bowl, target practice with his guns, and attend auctions/sales. Roger enjoyed giving to others, and was very humble and kind. Roger is survived by many cousins, including: John Clayton (Kristyn) Briggs of Vermontville, Judy Lemon of Potterville, Lynn Brooks of Auburn, IN; dear friends, David and Paula Benedict from Ft. Collins, CO; his beloved cats, Gandalf and Jack; and many friends at the Vermontville Fire Department and within the community of Vermontville. He was preceded in death by his parents; and his best-friend, Monte O'Dell. Friends are encouraged to remember Roger by attending a Community Affirmation Service at The Vermontville Fire Station on Saturday, February 8, 2020, 11:00 AM. Those attending are requested to bring a baseball bat with you for a special salute. Roger suggested many years ago that if anyone wanted to remember him, they were welcome to donate to the Maple Valley Scholarship Fund. Friends and family are encouraged to share memories of Roger on his Tribute Page at www.PrayFuneral.com. The family is in the care of Pray Funeral Home, Charlotte.

Roger L. Corey, a quiet and gentle man that silently supported the Village of Vermontville in many ways, died February 3, 2020 at the age of 65. Roger was born June 3, 1954 in Charlotte to Marion and Flossie (Case) Corey, and lived his entire... View Obituary & Service Information

The family of Roger Lee Corey created this Life Tributes page to make it easy to share your memories.

Send flowers to the Corey family.