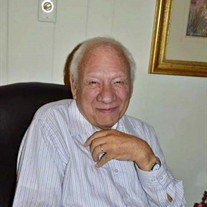 Ronald Lee Ramsey, a fun, loving, and flat-out good guy, died Friday, December 10, 2021. Ronald, 85, of Vermontville, MI, was born April 5, 1936, in Ft. Wayne, IN, to Ivan and Elizabeth (Lee) Ramsey. Following high school graduation Ronald enlisted in the Marines and proudly served his country during the Korean War. On April 1, 1965, Ronald married the love of his life, Kay Francis Long. The couple spent the next 53 years creating their legacy until her passing in 2018. Ronald and his wife enjoyed traveling, and were proud to say that they travel led to all 50 states. He worked as a Commercial Plumber, and was a member of the Plumbers Union. Later in life Ronald started his own Trucking Company. His hobbies included woodworking, antiquing, trying new restaurants, spending time at Waffle FarmS Campground, and anything that involved history. Ronald attended the Vermontville Methodist Church and was always a member of the American Legion Post 0222. Above all his proudest accomplishments in life were his family and his service to his country. Ronald is survived by his children, David (Pam) Ramsey, Teresa (Rodrick) Hall, Gary (Mary) Smith, Cindy (Frank) Dietz; 9 grandchildren; 7 great-grandchildren; 1 great-great-grandchild; siblings, Bob Ewart, Chuck Ewart, Bonnie Blessing; and several extended family members. He was predeceased by his wife, Kay; daughter, Carla Ramsey; son, Steven Ramsey; brother, Eric Zier; and his parents. Friends and family are encouraged to support Ronald’s family by sharing memories on his tribute page at www.prayfuneral.com. Memorial contributions are suggested to The American Legion Post 0222. The family is in the care of Pray Funeral Home.

The family of Ronald Lee Ramsey created this Life Tributes page to make it easy to share your memories.

Send flowers to the Ramsey family.