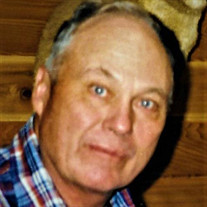 Ronald "Ron" Laverne Shepler, an independent and very devoted farmer, died Sunday, July 29, 2018 at his family farm surrounded by his family. Ron, age 85, was born February 6, 1933 in Lansing, MI, to Harry and Pauline (Root) Shepler. He was a graduate of Lansing Eastern High School. After graduating high school he went to serve in the United States Marine Corps. On August 2, 1952, Ron married his sweetheart Norma Wilhelm and they spent the next 65 years creating their legacy together. Despite growing up a city kid in Lansing, Ron knew that he wanted to be a farmer at the age of 5. He was a very successful and devoted dairy and cash crop farmer. Ron managed 100 head of dairy cattle, naming and remembering each and every one. Following a long day of work on the farm, Ron was welcomed with a homecooked meal by Norma. Ron was a man who could create an experience with the simplest of things around the farm. His children and grandchildren cherish the time that they spent on the farm with dad and grandpa. He loved wintering in Florida, swimming, and walking two miles a day. Traveling was one of Ron's favorite hobbies, he and Norma traveled all across the country…they would pack up the fifth wheel and go. Ron's sense of direction was top notch, he did all of this traveling without using a map. His grandchildren cherish the numerous adventures that they spent each year with grandpa and grandma. Ron was the type of person that when he spoke you listened. He always told people to "Accomplish what you want, because you only have one shot at life." Ron is survived by his loving wife, Norma; children, Julie (Bruce) Telfer, Betty (Darryl) Shook, and Bill Shepler; grandchildren, Amy Williams, Carla Vastine, John Shook, Dennis Shook, and Kimberly Hubbs; 5 great-grandchildren; and sister, Bonnie (Forrest) Hatch. Ron was predeceased by grandchildren, Staff Sgt. Garett Swift and Charlotte Shook; brother, Roger Shepler, and his parents. Friends are encouraged to support Ron's family at visitation and funeral services. Funeral services are Saturday, August 4, 2018, at 11:00 AM at Pray Funeral Home in Charlotte. Visitation is Friday, August 3, 2018, 2-4:00 PM and 6-8:00 PM. Friends and family are encouraged to share memories of Ron on his Tribute Page at www.PrayFuneral.com. The family is in the care of Pray Funeral Home, Charlotte.

The family of Ronald Laverne Shepler created this Life Tributes page to make it easy to share your memories.

Send flowers to the Shepler family.