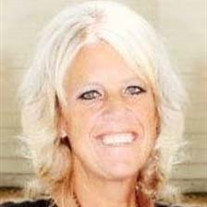 Ronda Lorraine Tuckey, a woman always thinking of others, and loved by all who knew her, of Charlotte, Michigan died Thursday, September 24, 2020. Ronda, 56, was born in Newberry, Michigan to Ronald and Karalee (Nickerson) Holt. The family moved to Grand Rapids before settling in Charlotte, where Ronda graduated from Charlotte High School in 1981. On June 26, 1982, Ronda married Brian Tuckey and together they built a loving family and home. Ronda was most proud of her marriage and family. Everyone knew how much Ronda and Brian loved each other. Their relationship was admired and was one that most people envied. Ronda would reply, “just care more about your partner than yourself.” The family will remember Ronda as a “true Mema,” making her home an oasis for her family, and everybody else’s Aunt Ronda or Mema. Ronda was a stay-at-home mom while her children were growing up. When she started working outside the home, she worked for the Siren-Eaton Shelter, the Union Bank and as a Teller for 17 years at LAFCU, where she received the Peoples’ Choice Award for Best Teller. Ronda enjoyed being with her family, and making the best Bloody Mary’s by the pool. She enjoyed traveling with her kids to Punta Cana, Mexico, and many other places. She was also a wonderful home decorator. Her artistic talent gave her many ideas, she’d tell Brian about them, and he would build it. Together they discovered antique treasures they could fix and sell, creating a business that they loved. Ronda is survived by her devoted husband, Brian; her son, Trent (Brandie) Tuckey; and daughter, Neisha (Todd) Trowbridge (Uriah Hammond); four grandchildren, Jazzlynn, Brylee, Deegan and Brayson; her mother, Kara (Robert) Morales; and her soul “sista,” Chris (Scott) Volz. She was predeceased by her father, Ronald Holt in 1995. Friends are encouraged to support Ronda’s family. Funeral services are Thursday, October 1, at 4:00 p.m. in the Pray Funeral Home Garden, in Charlotte, with Ed Tuckey officiating. Visitation is Wednesday, September 30, from 2:00-4:00 p.m. and 6:00-8:00 p.m. inside the funeral home. Mask and distancing guidelines will be practiced both indoors and outdoors. If desired, the family suggests memorial contributions to the Ronda Tuckey Memorial Fund at LAFCU. Friends and family are encouraged to share memories of Ronda on her Tribute Page at www.PrayFuneral.com. The family is in the care of Pray Funeral Home, Charlotte. The funeral service will be webcast so you may watch it from any computer, smartphone, or mobile device that has internet access. Go to www.prayfuneral.com, click on Ronda’s tribute, and then click on Photos & Videos from your computer (or Media from your smart phone). Just prior to the beginning of the service, a link will appear on this page to watch the webcast.

Ronda Lorraine Tuckey, a woman always thinking of others, and loved by all who knew her, of Charlotte, Michigan died Thursday, September 24, 2020. Ronda, 56, was born in Newberry, Michigan to Ronald and Karalee (Nickerson) Holt. The family... View Obituary & Service Information

The family of Ronda Lorraine Tuckey created this Life Tributes page to make it easy to share your memories.

Ronda Lorraine Tuckey, a woman always thinking of others, and...

Send flowers to the Tuckey family.