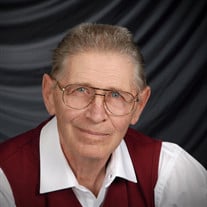 Russell Howard Weiler, a man known by all for his story telling, passed away peacefully surrounded by his loving family and friends on Saturday, August 10, 2019. Russ, 79, of Vermontville, was born May 22, 1940, the son of Howard and Esther (Flanders) Weiler. Russ grew up and spent most of his life in Vermontville, MI. He graduated from Vermontville High School class of '58. He later went on to work at Diamond Reo for 18 years and then at General Motors for 25 years before he retired in 2002. Russ was an active member of UAW Local 652 holding various union appointed positions, he also was an active member of the Eaton County Democratic Party. In 2012 Russ found out that his heart had been severely damaged by silent heart attacks and in order to save his life he received a left ventricular assist device (LVAD). This device allowed for 7 more amazing years to spend with his family and friends. Russ enjoyed puttering in the garage and working on any and everything with a motor. He loved country life where he could chop his own wood, work on or ride around on a tractor, hunt in the fall, and have lunch with his Vermontville classmates. He loved traveling, especially to visit his children, grandchildren and watching as many of their games, competitions, plays and other school events as he could. He also enjoyed driving to Cadillac where he could cheer on his favorite wrestler, Kris P. Bacon. Russ was very proud of all of his kids and grandkids who lovingly called him Pa. Lastly, Russ was a fan of the Lansing Lugnuts, he attended numerous games with his wife and special friend, Dottie Feighner. Russ is survived by his wife of 37 years, Victoria (Hatt); children, Russell (Eleanor) Weiler Jr., Steven (Carol) Weiler, James Weiler, Dawn Weiler, Karris (Robert) Hutchison, Andy (Ann) True; 10 grandchilren; 5 great-grandchildren; sisters, Kathy Neal, Linda (Pat) Golnek; many aunts, uncles, nieces, nephews, and cousins; special friends, Ann Samann, Barry Kent, and Pamela and Wayne Stine; and finally his dog, Anajai. He was predeceased by his parents; brother, Ralph; and infant daughter, Loretta. Friends are encouraged to support Russ's family at visitation and memorial services. Memorial services are Saturday, August 17, 2019 at 2:00 p.m. at the Wacousta Community United Methodist Church. There will be visitation for two hours prior to the memorial. If desired, the family suggests memorial contributions to The American Heart Association, or a charity of your choice. Friends and family who are not able to attend the service may view the service for Russ on his Tribute Page at www.PrayFuneral.com. The family is in the care of Pray Funeral Home, Charlotte.

Russell Howard Weiler, a man known by all for his story telling, passed away peacefully surrounded by his loving family and friends on Saturday, August 10, 2019. Russ, 79, of Vermontville, was born May 22, 1940, the son of Howard and Esther... View Obituary & Service Information

The family of Russell Howard Weiler created this Life Tributes page to make it easy to share your memories.

Russell Howard Weiler, a man known by all for his story telling,...

Send flowers to the Weiler family.