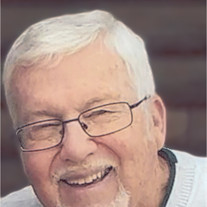 Terence "Terry" Clinton Merrick, the oldest Disney Kid around, of Eaton Rapids, Michigan died January 25, 2022. Terry, 76, was born June 18, 1945 in Charlotte to Jesse James and Lenora June (Friar) Merrick. Terry was the family touch stone, THE guy, very smart, with a wonderful and rich sense of humor. He graduated from Battle Creek Central in 1963, was a First-Class Petty Officer and Fire Control Technician in the US Navy, and loved piloting his own aircraft. He was an award winning golfer, a fisherman, a bowler with a couple of 300 games; enjoyed boating, camping, MSU and Lions football, Euchre and Poker, playing piano. He enjoyed it all. He made numerous videos and loved editing. Terry graduated from Cooley Law School in 1981, and became a Private Attorney. He retired as a Judge with the State of Michigan. Terry married Charlene Kae (Hineline) in 1999 and were married for fourteen years. He absolutely loved going to Disney and traveled there more than 40 times with his family. Terry is survived by his children, James Todd Merrick, Jeffery Dean (Terri) Merrick, Jesse Allan (Skye) Merrick; grandchildren, Shelby, Brody, Avery, Elle, and Theodore; great-grandchildren, Cooper and Jackson; sister, Linda (Herbert) Brizendine; nephews, Matthew (Lisa) Brizendine, Nicholas (Kelly) Brizendine; and many special friends. He was predeceased by his wife, Charlene; parents; and brother, Tim Merrick. Friends are encouraged to support Terry's family by attending services or sharing memories on his Tribute Page at www.prayfuneral.com. Funeral Services are Tuesday, February 1, 2022, 11:00 a.m. at Pray Funeral Home with Rev. Richie Thomas officiating. Visitation will be held just prior to the service from 10-11:00 a.m. Interment will follow at Ft. Custer National Cemetery in Augusta, MI. The family is also planning a Summer Celebration of Life for Terry. The funeral will be webcast so you may watch it from any computer, smartphone, or mobile device that has internet access. Go to www.prayfuneral.com, click on Terry's tribute, then click on Photos and Videos from your computer (or Media from your smart phone). If desired, the family suggests memorial contributions to Dexter Lake Church in Battle Creek. The family is in the care of Pray Funeral Home, Charlotte.

The family of Terence Clinton Merrick created this Life Tributes page to make it easy to share your memories.

Send flowers to the Merrick family.