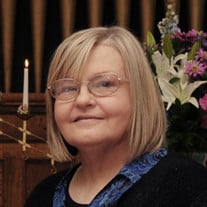 Teri Ann Stroud of Olivet, a loving and caring friend and teacher, passed away unexpectedly on March 18, 2020 at the age of 72. Teri, was born September 4, 1947 to Thomas and Janice (Granstrom) Reed in Charlotte, MI. She attended Charlotte High School, where she was active in high school sports and graduated in 1965. In the early 70's, shortly after marrying James Stroud, they moved to the Charlotte area where Teri became a substitute teacher. Teaching was a career that she truly enjoyed, perhaps because of her sense of kindness and her love to help others. She gained valuable experience as a substitute teacher, which helped her move into adult education helping adults complete high school, which then led her to become an alternative education teacher. Teri earned her Master's Degree in Public Administration, concentrating on SPADA - Specialty Program in Alcohol and Drug Abuse, to help in her Alternative Education position. Teri and her husband loved camping in their earlier years. Her nephews Jeff and Andrew Reed, spent many weekends with them exploring their farm and the countryside. Teri and James were blessed with the birth of their son, Benjamin. Years later after Ben and his wife Rachel moved to the state of Washington, Teri and James would make numerous trips there to visit. They purchased a home near Ben where they spent many summers and visited during the winter months. Teri was most proud of her family, and her ability to earn her Master's Degree while actively teaching. She was also proud of her work in Children's Ministry at Mount Hope Church where she loved working with the children of the congregation. Teri is survived by her husband, James Stroud; son, Benjamin and his wife Rachel; their three children, Malcolm, Dominic, and Violet; sister-in-law, Barbara Reed; and her nieces and nephews, Jeffery (Giovanna) Reed, Andrew (Bobbi Sue) Reed, Stephanie (Charles Covey-Brandt) Stroud, Mark Stroud, Kim Stroud, Scott (Missy) Stroud, Lisa (Clint) Skeels. She was preceded in death by her parents; and her brother, Thomas M Reed. Friends are encouraged to support Teri's family through calls, letters, and through Teri's Tribute Page at www.PrayFuneral.com. Services for Teri will take place at a time and date to be determined after the current quarantine and sheltering guidelines have been eased. The family is in the care of Pray Funeral Home, Charlotte.

Teri Ann Stroud of Olivet, a loving and caring friend and teacher, passed away unexpectedly on March 18, 2020 at the age of 72. Teri, was born September 4, 1947 to Thomas and Janice (Granstrom) Reed in Charlotte, MI. She attended Charlotte... View Obituary & Service Information

The family of Teri Ann Stroud created this Life Tributes page to make it easy to share your memories.

Teri Ann Stroud of Olivet, a loving and caring friend and teacher,...

Send flowers to the Stroud family.