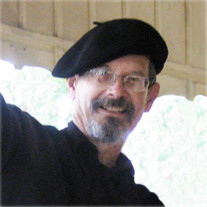 Thomas James McLean, beloved husband and father, passed away on August 14, 2019 at his home in Okemos, MI. Thomas (Tom), 71, was born on February 15, 1948 in St. Paul, Minnesota to Myron and Agnes (neé Gorgas) McLean. While an accomplished lawyer, he is remembered as a brilliant, creative Renaissance Man with endless imagination and energy, a free spirit with a spontaneous wit and a great sense of humor, and an inveterate writer of lists. He was a skilled musician, writer, sculptor and inventor, with deep interests in science and philosophy. Tom had the capacity to imagine, conceptualize and execute to completion whatever he set his mind on doing, such as designing and building a boat or robot. He was also a fine golfer and adventurous sailor. At 16, Tom was invited to play classical accordion in New York City on the Ted Mack show. He graduated from the University of Chicago, and then completed his law degree at the University of Pittsburgh Law School, where he served as Assistant to Dean John Murray throughout his studies. While at Pitt, Tom wrote for the University of Pittsburgh Law Review, and was a member of the winning team for “Moot Court”. Tom subsequently worked as a contracts attorney, and was a partner at the Schnader, Harrison, Segal and Lewis Firm in Philadelphia, Pennsylvania, where he worked from 1980-1997, traveling frequently to New York and Los Angeles. During his Philadelphia years, Tom contributed considerable time to the community. He was the head of the Board of Directors of Oak Lane Day School in Blue Bell, PA, and served as the Chair of both East Norriton Township’s Zoning Board and Planning Commission. In 1997, Tom moved to Okemos, MI to allow his wife to accept a position at Central Michigan University. While maintaining his law credentials until recently, he enjoyed his retirement years by traveling, and engaging in photography, bonsai and various artistic endeavors. He also taught himself computer programming so he could design and build autonomous robots. One of his last projects was writing a book that effectively “broke the Sudoku code.” Tom also continued to volunteer his time to school events, participating with his son in Science Olympiad and chairing post-prom events at East Lansing High School when his daughter was graduating. Above all else, Tom adored his children and his wife and was very proud of their accomplishments. Thomas is survived by his loving wife of nearly 50 years, Dr. Athena (Barthelmess) McLean; daughter, Thea Helen McLean (and Dr. Scott Little, son-in-law); son, Trevor Jacob McLean; and sister, Dr. Susan McLean McGrath (and Dr. James McGrath, brother-in-law). Graveside services were held August 15, 2019 at 10:00 a.m. at Glendale Cemetery in Okemos with Pastor John Burow officiating. If desired, the family suggests sending contributions to a fund in memory of Thomas James McLean to Partners in Health, P.O. Box 996, Frederick, MD, 21705. Friends and family are encouraged to share memories of Thomas James McLean on his Tribute Page at www.PrayFuneral.com. The family is in the care of Pray Funeral Home, Charlotte.

Thomas James McLean, beloved husband and father, passed away on August 14, 2019 at his home in Okemos, MI. Thomas (Tom), 71, was born on February 15, 1948 in St. Paul, Minnesota to Myron and Agnes (neé Gorgas) McLean. While an accomplished... View Obituary & Service Information

The family of Thomas James McLean created this Life Tributes page to make it easy to share your memories.

Send flowers to the McLean family.