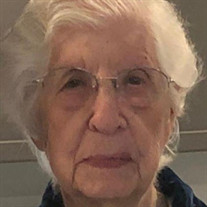 Verda Mae Nightengale of Potterville passed away at the age of ninety-nine. Verda was born in Lansing to Sylvester Clark and Vera Mae Whitney. Spanning two centuries and eighteen presidents, Verda's life was filled with joy, laughter and a great deal of love. Verda attended Potterville High School. An actual Rosie the Riveter, Verda worked on the assembly line during World War II. She married Phillip Nightengale in 1944 and was by his side for 55 years until his death. With Phillip, she raised two daughters, helped run the family farm and still found time for active involvement in the local women's club. After their daughters left home, Verda worked at Carl's Supermarket and became a constant figure at the check-out line for several generations of customers. Over the years, Verda and Phillip's family grew through marriage, birth and adoption, and she proudly took on the roles of grandmother and great-grandmother. Verda had a zest for life. She enjoyed big band music and would dance to her "records" while cooking, cleaning or just because the music was on. A thoughtful hostess, she would make sure everyone coming to her home felt cared for. Whether it was serving her guests' favorite snacks at her monthly card parties, making her famous homemade noodles for every special occasion, or ensuring her freezer was stocked with treats for her grandkids, she knew how to make others feel special. Verda's warmhearted nature had a positive impact on many lives. She is survived by her two daughters, Sharon Nightengale of Charlotte and Cathy Nightengale-McHalpine of Mt.Pleasant; grandchildren, Sara (Jose) Saylor, Suzie (Brian) Gee and Matthew McHalpine; great-grandchildren, Whitney and Jacob Castenholz and Buturo and Bowen Bartolomei; her siblings, Maxine Cady and Russell Whitney; and many nieces and nephews. She was predeceased by her husband, Phillip; son, Phillip Jr.; her parents; sisters, Orpha Hayden and Gloria Hickox; and brothers, Donald, Robert and Wayne Whitney. A private graveside service will be held to celebrate her life. Verda's greatest legacy is the kindness and love she freely gave to others. And the ripple effect of that type of love is timeless. In lieu of flowers, her family asks that you honor her memory through your own random act of kindness. Friends and family are encouraged to share memories of Verda on her Tribute Page at www.PrayFuneral.com. The family is in the care of Pray Funeral Home, Charlotte.

Verda Mae Nightengale of Potterville passed away at the age of ninety-nine. Verda was born in Lansing to Sylvester Clark and Vera Mae Whitney. Spanning two centuries and eighteen presidents, Verda's life was filled with joy, laughter and a great... View Obituary & Service Information

The family of Verda Mae Nightengale created this Life Tributes page to make it easy to share your memories.

Verda Mae Nightengale of Potterville passed away at the age of...

Send flowers to the Nightengale family.