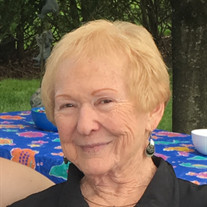 Virginia (Ginny) Elizabeth Aitken Lewis, a friend to many, passed away November 4, 2019. Ginny, age 76, was born in Detroit, Michigan on November 10, 1942. Ginny's upbringing was highly influenced by her grandmother, Mable King. She was raised in Detroit and Walled Lake, graduating from Walled Lake High School in 1960. Following high school she attended Ferris State University, graduating in 1962 with a degree in Court Reporting. Before marrying Thomas Andrew Aitken on April 4, 1964, Virginia worked for the Federal Bankruptcy courts in Grand Rapids, Lansing, and Kalamazoo. After they married, Ginny and Tom resided in Charlotte, Michigan, for 27 years where they raised their three children and she was an active stay-at-home mom, helping her children in every way she could. She loved traveling and showing her children the world. In spite of her allergies, she enjoyed gardening, as well as any time she could spend on the golf course and happily passed on her love of golf to her children. Over the years, Ginny was active in her community in many ways, including: treasurer of St. John's Episcopal Church, member of the altar guild and the choir, president of the Charlotte Women's Club (GFWC), and an active member of the Charlotte Country Club. In 1994 she moved to and enjoyed life on Gun Lake, especially on the deck with a glass of wine, family and friends. After losing her first husband of 33 years in 1997, she married Fritz Lewis in 2000. Ginny particularly enjoyed singing in the choir at Emmanuel Episcopal Church for many years, and was an avid bridge player. Ginny is survived by her son, Brian (Dianne) Aitken of Livonia; daughters, Marguerite (Carl) Falkenstern of Ada, and Melissa Aitken of West Bloomfield; grandchildren, Erik Aitken, Emily Aitken, Chloe Falkenstern, and William Falkenstern. She was preceded in death by her first husband, Thomas Aitken in 1997, and her second husband, Fritz Lewis. Visitation will be held at Pray Funeral Home in Charlotte on Friday, November 8, 2019, 2-4:00 PM and 6-8:00 PM. Funeral service will be at Emmanuel Episcopal Church in Hastings on Saturday, November 9 at 1:30 PM with visitation in the Parish House beginning at 12:00 noon. In lieu of flowers, the family requests donations to the Alzheimer's Association research fund. Friends and family are encouraged to share memories of Ginny on her tribute page at www.PrayFuneral.com. The family is in the care of Pray Funeral Home.

Virginia (Ginny) Elizabeth Aitken Lewis, a friend to many, passed away November 4, 2019. Ginny, age 76, was born in Detroit, Michigan on November 10, 1942. Ginny's upbringing was highly influenced by her grandmother, Mable King. She was raised... View Obituary & Service Information

The family of Virginia Lewis created this Life Tributes page to make it easy to share your memories.

Virginia (Ginny) Elizabeth Aitken Lewis, a friend to many, passed...

Send flowers to the Lewis family.