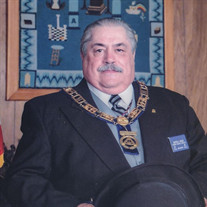 Warren Arthur Caruss, 75 of Dimondale, a guy who enjoyed learning about the world around him and enjoyed finding the humor in situation, died October 21, 2021. He was born in Lansing, MI on January 18, 1946 to Byron and Thelma (Oppenlander) Caruss, graduated from Holt High School and later from Central Michigan University. He retired from Auto Owners Insurance in technical support, but had also worked as a bartender at Scofes, and was a maitre d' at Top of the Park in Traverse City in the early 80's and he also taught wine appreciation at Lansing Community College (LCC). A very intelligent man, Warren enjoyed reading encyclopedias as a child and was always full of helpful facts. Always laughing and smiling, he enjoyed joking with his family and friends, especially his twin brother Wayne. They enjoyed going to twins conventions together with their mom, and even won a prize for the most identical twins. It wasn't until high school that they tried to be different, but even when shopping separately they would come home with the same clothes. Often with his servant's hat on, Warren enjoyed being a boy scout and earned his Eagle Scout in 1963, Order of the Arrow in Dimondale Troop 43, and he was a member of the Masonic Lodge in Dimondale. His activities over the years include: Past Master of Dimondale Lodge #449 FandAM, Member of Potterville Lodge #367 FandAM, Associate Regent of the York Rite Sovereign College of North America - Having received the Order of the Purple Cross, Past High Priest of Grand Ledge Chapter #85, Past Thrice Illustrious Master Grand Ledge Council #63, Past Most Illustrious Grand Master of the Grand Council of Royal and Select Masons of the State of Michigan 2006-2007, Past Right Puissant Regional Deputy General Grand Master of the General Grand Council Cryptic Masons International, Past Commander of Charlotte Commandery (Now Lansing #25), Past Sovereign Master of Ionic Council Allied Masonic Degrees #251, Past Governor of King Athelstan #47 York Rite Sovereign College of North America, Member of Trinity Council #36 Knight Masons, Member of Michigan College Societas Rosicruciana in Civitatibut Foederatus, Member of Michigan Priory Knight York Cross of Honor, Held Knight York Grand Cross of Honor - 1 quadrant Member of the Scottish Rite, Past Worthy Patron - Order of the Eastern Star. Warren is survived by his siblings, Wilma (Richard) Bayles, Theda (Charles) Langstaff, Delos (Sharon) Caruss, Adla (George) Lorimer; sister-in-law, Zana Caruss; and many nieces and nephews. He was predeceased by his identical twin brother, Wayne; sister-in-law, Kathy and his parents. Friends and family are encouraged to support Warren's family by attending services or sharing memories on his tribute page at www.prayfuneral.com. Visitation is at the Grand Ledge Masonic Lodge on Tuesday, October 26, 11 AM - 12 noon, with a memorial service at noon. Memorial contributions are suggested to Dimondale Lodge #449 F and AM, or Potterville Loge #367 F and AM. The family is in the care of Pray Funeral Home.

Warren Arthur Caruss, 75 of Dimondale, a guy who enjoyed learning about the world around him and enjoyed finding the humor in situation, died October 21, 2021. He was born in Lansing, MI on January 18, 1946 to Byron and Thelma (Oppenlander)... View Obituary & Service Information

The family of Warren Arthur Caruss created this Life Tributes page to make it easy to share your memories.

Warren Arthur Caruss, 75 of Dimondale, a guy who enjoyed learning...

Send flowers to the Caruss family.