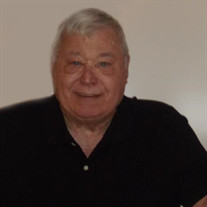 On December 4, 2018, William Lloyd Catey completed the last wish in his bucket list to see the Panama Canal. Later that night he died unexpectedly while on the cruise ship. Lloyd, 80, was born on May 3, 1938 in Grand Ledge MI to Wilford and Frances (Strange) Catey. Lloyd shared the womb with twin brother Charles, but was the first to enter the world. He graduated from Grand Ledge High School. He retired in 1992 after working 23 years as a welder at Michigan State University. On August 24, 1955 he married Linda Cagle, and together they created their legacy before her passing in 2012. Following Linda’s death, Lloyd moved to Florida where he married Phyllis Smith. With this new union, Lloyd gained daughters Susan (Chris) Smith Kihle and Lori Smith Escareno and grandchildren Tyler and Kaitlyn Vetter and Connor Escareno. Lloyd enjoyed deer hunting, square dancing for 50 years, going to casinos and traveling. Lloyd was extremely proud of his 22-year sobriety. ABOVE all, Lloyd’s BIGGEST passion in life was his family. A proud, brother, father, grandfather, and great grandfather, he had a heart that was filled with love for everyone. Lloyd is survived by his wife Phyllis; Children; Shannon Lovaas and Shari Alber. Grandchildren; Jason Pearson, Melissa Pohl, David Pearson, Erika (Dane Porter) Lovaas, and Mollie Alber, Great Grandchildren; Tyler, Hazel, Rhyan, McKenna, Vincent, Gabriel, Cyrus, and Jude; Siblings Fannie Mae O’Neil, Mary (Tommie) Hahn, Tom (Shirley) Catey, and Sam Catey. Lloyd was preceded in death by his wife of 56 years, Linda; daughter Alisa Pearson; granddaughter Sallie Lovaas; Brothers, John, Joe, Dan , and Charles Catey; and his parents. Friends are encouraged to support Lloyd’s family at visitation and funeral services. Funeral services are Saturday, December 15, 2018 at 11:00 a.m. at Pray Funeral Home in Charlotte. Visitation will be held one hour prior to the funeral. If desired, the family suggests memorial contributions to a charity of your choice. Friends and family are encouraged to share memories of Lloyd on his Tribute Page at www.PrayFuneral.com. The family is in the care of Pray Funeral Home, Charlotte.

On December 4, 2018, William Lloyd Catey completed the last wish in his bucket list to see the Panama Canal. Later that night he died unexpectedly while on the cruise ship. Lloyd, 80, was born on May 3, 1938 in Grand Ledge MI to Wilford and... View Obituary & Service Information

The family of William 'Lloyd' Catey created this Life Tributes page to make it easy to share your memories.

Send flowers to the Catey family.