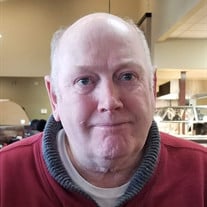 Andrew J Pray, of Dimondale, a gentle giant of a man who was 100 farmer passed away in his wife's arms on December 5, 2020 in Lansing, MI at the age of 68. Andrew was born on December 19, 1951 to George and Emma (Taylor) Pray in Lansing, MI. Even before graduating from Everett High School, he began his lifelong farming career driving the tractor and the farm's 1 ton truck to help out with farm chores. On June 5, 1982 Andrew married Kathryn Campbell in Charlotte, MI. Early in his agricultural career Andrew ran a small dairy farm operation with his father George. Later, in partnership with his brother Henry Pray, Andrew developed a cow and calf operation, breeding and raising calves for sale. The last few years Andrew shifted 100 to crop farming. Andrew will be remembered by others as a hardworking and honest farmer. As part of his dedication to farming, he formerly served as a board member of the Eaton County Farm Bureau. In his leisure time, which was always at a premium around the farm, he enjoyed historical movies and documentaries, especially war stories. In his earlier years he developed the ability to repair televisions in the days of "tube" televisions. That transitioned to an interest in computers in the early 80's. He became a "computer guru", as his family referred to him, building and repairing his own computers and assisting friends with theirs as well. Andrew and Kathryn also enjoyed travel when they could coordinate it with the busy farm schedule. Their most recent travels were made in a motor home that Andrew renovated. He made sure to educate his wife Kathryn on the repairs, and how to take care of the motor home so she could be self-sufficient on future travels. Andrew is survived by his wife Kathryn; step-son Ralph French; granddaughter, Macy Grace French; three sisters, Georgina Pray, Ruth Ann (Terry Eitnier) Pray, and Linda Edgar; two brothers, Henry (Sandy) Pray, and Joseph A Pray; brother-in-law, Paul (Linda) Campbell; sisters-in-law Judy Campbell, Veronica (Max Curtiss) Crawford, Catherine Campbell, Marlene (Paul Ulrich) Stavros, and Pauline Bibler; and lifelong friend and best buddy, Ole Olson. Andrew was predeceased by his parents; and sisters-in-law Linda Pray, and Janet (Donald) Merren; brothers-in-law Donald Edgar, Leroy (Barb) Cole, Gaylord Campbell, Grover Bibler; Father-in-law Milo (Frances) Campbell and Mother-in-law Kathryn Campbell. Due to current COVID-19 restrictions, a memorial service for Andrew will take place when family health and COVID-19 restrictions allow at Pray Funeral Home. Watch for the announcement, hopefully in the near future. Friends and extended family members are encouraged to share remembrances and condolences online in Andrew's Tribute Page at www.prayfuneral.com. The family is in the care of Pray Funeral Home, Charlotte, MI.

Andrew J Pray, of Dimondale, a gentle giant of a man who was 100 farmer passed away in his wife's arms on December 5, 2020 in Lansing, MI at the age of 68. Andrew was born on December 19, 1951 to George and Emma (Taylor) Pray in Lansing, MI.... View Obituary & Service Information

The family of Andrew Jay Pray created this Life Tributes page to make it easy to share your memories.

Andrew J Pray, of Dimondale, a gentle giant of a man who was...

Send flowers to the Pray family.