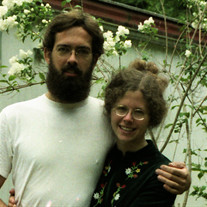 Barbara Louise (Black) Mooberry, a Charlotte, Michigan native passed away at her home in Evergreen, Colorado on Saturday, June 27, 2020 at the age of 71 of complications from multiple sclerosis. To be absent from the body is to be present with the Lord, it is acknowledged that she is in better hands now than ever. Her family derives comfort that her name is written in the book of life and that her spirit continues to abide in the eternal plan of God. Barbara was born March 29, 1949 the daughter of Herbert and Josephine (Connolly) Black. Barbara received the Lord Jesus Christ as her savior as a young woman and chose to be baptized in the Lyre River on the Olympic Peninsula in Washington State. While in Washington State, Barbara consented to marry Roger Mooberry, also a Christian, and they raised three boys Isaac, a chiropractor from Evergreen, Colorado; Matthew, soon to be a missionary in Brazil; and Jacob, currently finishing optometry school in Philadelphia. Barbara dedicated her life to her God, her husband and her family and daily prayed that the Lord would bless them and their efforts in life Throughout her life, her greatest joy was found in her family and her boys provided her great happiness. It is generally acknowledged that Barbara had the warmest and most attractive smile. One church elder’s wife commented, simply, “Oh, that smile.” Even in her age while being rolled around in a wheelchair, people on the sidewalk would stop her, bend down close and exclaim, “You have the most lovely skin.” Barbara was an exceedingly beautiful and compassionate woman. Perhaps the one was a reflection of the other. Barbara received her bachelor’s degree in education from Marygrove College in Detroit. Using her education she worked with special education students in Cadillac, prior to moving to the west coast and settling in Port Angeles, Washington. With the advent of three boys, Barbara participated in homeschooling programs in Longview, Washington where her husband’s work took the family and where they lived for the next 20 years. While there, Barbara served as a Sunday School director, taught in public schools, finished a Master’s degree in education and enjoyed camping and travel in the region and returning to the Charlotte and Ann Arbor areas for visits with family and friends and the occasional class reunion. Barbara’s strength became subjected to relapses from multiple sclerosis that was diagnosed in her early forties. The insidious disease was treated using modern technologies, but they only slowed the progression of deterioration both somatic and cognitive. Barbara’s condition was cared for by her husband who was a strong advocate for her throughout multiple sclerosis’ encroaching disablement. Barbara’s bout with multiple sclerosis never seemed to shake her faith in God nor made her doubt that her life could be lived effectively in prayerful support of her family, friends and community. Barbara’s husband notes that, “Everywhere I would go with Barbara was like being in paradise.” She could make the most of what were, for us, sometimes minimally sustainable lifestyle conditions. Nevertheless, her boys never remember want, but are thankful for the nurturing environment that their parents were able to provide. For twenty years the family lived next to the Columbia River that provided a wealth of opportunities for recreation and freedom. Fishing, canoeing, swimming and enjoyment of beach activities were family favorites. Barbara is survived by her husband, Roger; their three sons, Isaac and his wife Katy, Matthew and his wife Maggie, and Jacob and his wife Keara. She is also survived by her 9 grandchildren and her siblings, Marcia McMahon, Margaret Spaly, Susan Black and Herbert Black Jr. The family will honor Barbara’s life at a graveside service on the family lot in Maple Hill Cemetery in Charlotte, Michigan on July 17th at 11:00am. The Pray Funeral Home encourages family and friends to share condolences and tributes to Barbara on her Tribute Page at www.PrayFuneral.com. Flowers would be nice. Contributions, if considered, would be best made to the Multiple Sclerosis Society. Barbara’s family appreciates your prayers and thanks her friends for their prayer support during her illness.

Barbara Louise (Black) Mooberry, a Charlotte, Michigan native passed away at her home in Evergreen, Colorado on Saturday, June 27, 2020 at the age of 71 of complications from multiple sclerosis. To be absent from the body is to be present with... View Obituary & Service Information

The family of Barbara Louise Black Mooberry created this Life Tributes page to make it easy to share your memories.

Send flowers to the Mooberry family.