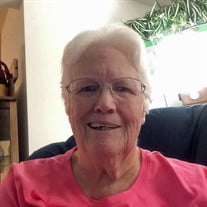 Barbara Dow Spray, 70, a fast friend and servant to all, passed away on May 16, 2021. Barbara was born on May 24, 1950 in St. Louis, Missouri, the daughter of Kenneth and Katharine (Thompson) Moody. Barb loved everyone wholly and taught forgiveness, even though she had endured many hurts and challenges, putting everyone ahead of herself. Her warm and easy ability to chat with and make friends in any setting drew a crowd of friends who became "sisters" and youngsters that became her "kids and grandkids." Barb was served as a paramedic for fifteen years in Missouri and Georgia. Barbara plunged into serving others-first in the AIDs epidemic and then on through the COVID pandemic in recent years. Barb became the "Nanny McPhee" of the nursing profession. Later she became a traveling nurse who took care of both her patients and their families. That took her to Delaware where she became acquainted with, and later married, Dave Spray in 2005. She moved to Charlotte in 2016 after the passing of her husband, Dave Spray, to be closer to her family. Barbara jumped into her volunteer mode after arriving in town, becoming an active volunteer at the Eaton Area Senior Center and Hayes Green Beach Memorial Hospital, now known as Sparrow Eaton Hospital. Barb gathered a new group of great friends that included the "Cardettes," a group that enjoyed trips to the nearest craft stores for card making supplies, finding a new place to eat, or anything else they could do together with lots of fun and laughter. She was also known for coordinating fun adventures such as ballooning, car tours, train rides and other things on the bucket list of hers and her friends. At home she loved the view of the woods from her apartment, even becoming "friends" with the deer, squirrels, turkeys, and raccoons who would come up to her deck and peek in the windows. Barbara is survived by two daughters, Becky (Jerry) Pottruff of Fife Lake, Michigan, and Katharine (Howard) Libs of Huntingtown, Maryland; siblings Ken Moody of Overland Park, Kansas, and Paul (Jane) Moody of Quincy, Illinois; nine grandchildren; one great-grandchild; lifelong friend Diane King and many other "sisters." She was predeceased by her husband, Dave; her parents; and her sister-in-law, Sheila. Friends and family are encouraged to share memories of Barbara on her Tribute Page at www.PrayFuneral.com. The family is in the care of Pray Funeral Home, Charlotte. A Memorial service will be conducted by Pray Funeral Home held at he Eaton Area Senior Center on a date to be announced.

Barbara Dow Spray, 70, a fast friend and servant to all, passed away on May 16, 2021. Barbara was born on May 24, 1950 in St. Louis, Missouri, the daughter of Kenneth and Katharine (Thompson) Moody. Barb loved everyone wholly and taught forgiveness,... View Obituary & Service Information

The family of Barbara Dow Spray created this Life Tributes page to make it easy to share your memories.

Barbara Dow Spray, 70, a fast friend and servant to all, passed...

Send flowers to the Spray family.