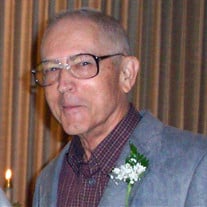 Bernard "Bernie" Williams, a kind and loving husband, father, grandfather and brother, died July 22, 2021. Bernie, 90, lifelong resident of Charlotte, was born September 2, 1930 in Charlotte to Harry and Queen (Moore) Williams. He was a soft-spoken man, kind-hearted and put his focus on others rather than himself. A family man, treasuring the time spent with his wife and children and was there when needed. He had a passion for flying, and was a flight instructor, and a founding member of the Eaton Flying Service. Bernie owned and operated Garfield Tavern with his wife Elsie for 9 years. Later he retired from General Motors as Plant Security. Game time with his family and friends and living his best life each and every day. Bernie was able to use his handy-man skills to help anyone in need. His love for travel, led to many fond memories created of the camping trips up-north and out west. If asked, Bernie would say he was most proud of his family. Bernie is survived by his daughters, Terry Wellman, Jo (Mike) Davis; son, Mark (Denise) Williams; grandchildren, Jarrod Schultz, Tony (Rachel) Schultz, Jeff (Lindsey) Davis, Kyle Williams, Kevin (Kelsey) Williams, Lauren Davis; seven great-grandchildren; siblings, Margaret Harmon, John (Betty) Williams, and Larry Williams. He was predeceased by his wife, Elsie; son, Ronald; and his grandson, Matthew. Visitation will be held Monday, July 26, from 6-8:00 p.m. and Tuesday, July 27, 10-11:00 a.m. A Memorial Service on Tuesday, July 27, 11:00 a.m. at Pray Funeral Home with Daniel Sowles officiating. Friends are encouraged to support Bernie's family by attending, or sharing memories on his Tribute Page at www.prayfuneral.com. The Williams family would like to thank his second family at Hope Landing for the exceptional care he received while there. If desired, the family suggests memorial contributions to Hope Landing. The family is in the care of Pray Funeral Home, Charlotte.

The family of Bernard "Bernie" Williams created this Life Tributes page to make it easy to share your memories.

Send flowers to the Williams family.