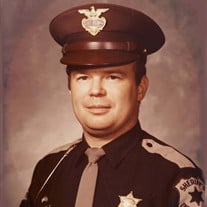 Bill Milton Kelly passed away peacefully at his home in Eaton Township on Thursday, August 5th 2021 after a long and valiant battle with ALS. He was born September 23, 1941 in South Bend, Indiana to Clifford Emerson Kelly and Cleo Fern (Walters) Kelly. He was 79 years old. After graduating from Washington Clay High School in South Bend, he joined the U.S. Navy. His lifetime adventure of seeing the world began upon the newly commissioned USS Long Beach, the world's first nuclear powered surface combatant. Upon completion of his full-time Naval commitment, he continued serving his country as a member of the U.S. Naval Reserves. The motto "To Serve and Protect" became his duty as he began his law enforcement career. He started with the Portage, MI Police Department, then moved on to Kalamazoo Township Police, and in 1968 became Chief of Police for the City of Galesburg, MI. In 1969 he began serving with the Eaton County Sheriff Department in Charlotte, MI where he finished out his law enforcement career. As a local business owner of K and K Accounting, The Computer Shop, the Movie Market, and others he contributed to the longevity and productivity of his community making many friends along the way. He was an advocate for privately helping others in their journey to success and giving encouragement along the way. Bill was a life-long learner who loved to read. His reading took him on many great adventures over the years. He himself has authored several books in which he shares his life stories, experiences, and insights. He believed we could all learn something from everyone we meet, and he learned much from the people he met as he traveled the world. Joy was found in every curve of the road as he cruised along in his classic Corvette convertible or on his vintage BMW motorcycles. Boating along the emerald waters of the Gulf Coast provided opportunities for him to reflect upon life and his earlier days spent at sea. Scuba diving wasn't just for work, it brought quiet solitude in new and ever changing environment. Flying brought him freedom as he took to the sky on many unforgettable journeys with family and friends. In 1973 Bill married Rocksan Lee (Wolcott) McGill in Charlotte, MI and together they had four children; Lanette, Duane, Belinda, and Kimberly. He is survived by his loving wife of 48 years, Rocksan Kelly; daughters, Lanette Kay McGill-Cater (Jon), and Kimberly Ann Kelly-Baxley (James); grandchildren, Autumn Lynn Jones-Allen (Jeremy), Duane Lee McGill Jr., Kellie Leigh Jones-Bartlett (Shane), Eric Thomas McGill (Morene), Evan Gregory Jones (Traci), Megan Kaylee Baxley-Sweeten (Taylor), Dane Kelly McGill, Chase Michael McGill, Whitney Taylor McGill; great-grandchildren, Hunter Gregory Jones, Wilson Shane Bartlett, Zoey Claire Baxley, Julia Morene McGill, Sabastain Alexander Bartlett, Katherine Elizabeth Allen, Zalina Rose Baxley, Miles Gregory Jones, Sadie Elizabeth Sweeten, Oscar Thomas McGill, Delaney Rae Jones, Floyd Preston Sweeten; siblings, Patrick Michael Kelly (Denise) and Barbara Kathleen Kelly-Penney (John); and many nieces and nephews. He was preceded in death by his parents, Clifford and Cleo Kelly; his brothers, Larry Dean Kelly and Charles Leroy Kelly; daughter, Belinda Kay Kelly; son, Duane Lee McGill; and great-granddaughters, Brooklyn Kay Bartlett and Olivia Lillian Bartlett. We would be remiss if we did not acknowledge his dear friend, Glenn Leonard, who added so much more to his life as they shared many wonderful adventures together. We also express our heartfelt gratitude to Kathy Stover who has sacrificed so much as she has faithfully cared for Bill through his long battle. He lived a full life made richer by the many friends and family members that he loved. A committal service of burial at sea will take place at a later date by the United States Navy. In lieu of flowers the family requests donations be made to the ALS Association at . Friends are encouraged to support Bill's family by sharing memories on his Tribute Page at www.prayfuneral.com. The family is in the care of Pray Funeral Home, Charlotte.

Bill Milton Kelly passed away peacefully at his home in Eaton Township on Thursday, August 5th 2021 after a long and valiant battle with ALS. He was born September 23, 1941 in South Bend, Indiana to Clifford Emerson Kelly and Cleo Fern (Walters)... View Obituary & Service Information

The family of Bill Milton Kelly created this Life Tributes page to make it easy to share your memories.

Bill Milton Kelly passed away peacefully at his home in Eaton...

Send flowers to the Kelly family.