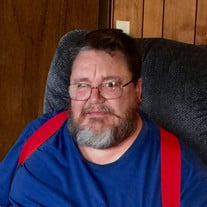 Brian Alan MacKenzie, an outdoorsman that greatly enjoyed fishing and hunting, died at his home in Vermontville, MI on April 14, 2019 of natural causes. Brian, age 60, was born March 2, 1959 in Hastings to Donald and Marilyn (Zimmerman) MacKenzie. The oldest of three children, Brian grew up with family hunting and fishing trips and continued the traditions with his grandsons, especially enjoying fishing on Thornapple Lake on his pontoon and trips to the U.P. Brian enjoyed the outdoors so much that he would spend his entire summer camping and fishing at Thornapple Lake with his friend, Steven Duffey. Brian graduated from Maple Valley High School in 1977, and then worked at General Motors as a forklift operator for 30 years, retiring in 2009. A talented singer, Brian enjoyed singing karaoke and was a previous winner of the talent contest at the Maple Syrup Festival. His family acknowledges he was very stubborn, often to their frustration, however, he would bend over backwards to help anyone that needed a hand. Devoted to his family, Brian was always helping his parents and finding ways to spend quality time with his daughters and grandchildren and encouraging them in many ways. He was a great friend and mentor. Brian is survived by his daughters, Darcy (Jason Nesky) MacKenzie and Erin (Joe) Elliston; grandchildren, Cameron, Avery, Cayden, and Dylan; parents, Donald and Marilyn MacKenzie; siblings, Steve MacKenzie and Valerie (Tom) Palmer; and many nieces, nephews, aunts, uncles and cousins. He was predeceased by his grandparents, Donald and Arvilla MacKenzie and Zimira and Esther Zimmerman; and best friend, Steven Duffey. A memorial service is scheduled for Saturday, April 27, 2019, 1:00 PM at the South Cochran Church of God in Charlotte, MI. Friends and family are encouraged to share memories of Brian on his Tribute Page at www.PrayFuneral.com. The family is in the care of Pray Funeral Home, Charlotte.

Brian Alan MacKenzie, an outdoorsman that greatly enjoyed fishing and hunting, died at his home in Vermontville, MI on April 14, 2019 of natural causes. Brian, age 60, was born March 2, 1959 in Hastings to Donald and Marilyn (Zimmerman) MacKenzie.... View Obituary & Service Information

The family of Brian Alan MacKenzie created this Life Tributes page to make it easy to share your memories.

Send flowers to the MacKenzie family.