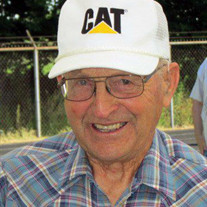 Charles E. Viele Sr. was born to Rolla and Cleo (Crook) Viele on October 19, 1925 in Vermontville. The third of five children, he was raised on the family farm on Brown Road in Sunfield Township. He graduated from Vermontville High School in 1943 and tried to enlist in the military during WWII but was refused because of his colorblindness and instead found other ways to serve and contribute. On May 19th, 1946, he married Louise Joppie. Together they had five children and were married for 75 years. Charles passed away on February 1, 2022 at age 96 after living a long and very full life. Charles was very community conscious. He joined the Volunteer Vermontville Fire Department in 1953 and served into his 80's, even becoming Fire Chief. He served nearly 30 years on the Vermontville and Maple Valley school boards. He was a member of the village council for many years, retiring in 2020. His volunteering extended beyond the village to the county level as well. He was a member of the Eaton Intermediate School District Board for many years and also a member of the Eaton County Road Commission for 10 years. Charles started out farming but after watching some heavy equipment working on a neighboring farm, he fell in love with Caterpillar bulldozers. He bought his first CAT, a D6 dozer, in 1954 and formed the Charles Viele Bulldozing Company, adding other CATs one by one over the years. He worked hard, following his passion until he was in his early 90's. Though Charles was usually all business, he did have one hobby and that was snowmobiling. He and Louise owned a place near Cadillac for that purpose and enjoyed many years of friends, family, and fun. What Charles loved the most was his 5 great-granddaughters: Juliana, Charlotte, Mary Louise, April, and Evelyn. He took great pride in them and always had the biggest smile for them. He also loved and was very proud of each of his 5 grandchildren: Brandy, Justin, Ethan, Nichole, and Eren. He was predeceased by his parents; son, Raymond N. Viele, DVM; brother, John Viele; and his sisters, Jeanette Strait and Mary Trowbridge. He is survived by his wife, Louise; son, Charles Viele Jr. (Kathy Kolodica) of Charlotte; daughters, Jeanne Straub (Mel) of Lowell, Denise Berry (Dale) of Vermontville, and Maurene Viele (Karl Sorensen) of California; sister, Rachel Weiler of Pennsylvania; grandchildren and great-grandchildren, as well as many nieces and nephews. There will be no services at this time but a memorial will be held in the summer of 2022. Burial will be at Woodlawn Cemetery, Vermontville. Memorial contributions can be made to either the Maple Valley Memorial Scholarship Fund, Box 715, Nashville, MI, 49073, or the Vermontville Fire Department, 125 W. First Street, Vermontville, MI, 49096. Friends and family are encouraged to support Charles' family by sharing memories on his tribute page at www.prayfuneral.com. The family is in the care of Pray Funeral Home.

Charles E. Viele Sr. was born to Rolla and Cleo (Crook) Viele on October 19, 1925 in Vermontville. The third of five children, he was raised on the family farm on Brown Road in Sunfield Township. He graduated from Vermontville High School in... View Obituary & Service Information

The services and arrangements for Charles Viele are pending at this time.

Send flowers to the Viele family.