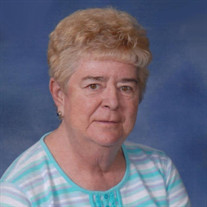 Chere Lynn Dymond, 76, of Charlotte, died Wednesday, January 12, 2022 in Lansing. Chere was born May 7, 1945, in Olivet, MI. She graduated from Olivet High School and married Robert Reynolds and the two worked alongside each other painting houses as “Bob Reynolds Painting.” When Bob died in 1986, she remarried to Eldon Dymond, and the two enjoyed 18 years of happy marriage until his death in 2007. Eldon and Chere could be seen at the Eaton Place for breakfast, lunch and dinner almost every day. They enjoyed seeing their friends, and also worked together for many years in the community as members of the Charlotte Kiwanis Club. Chere worked several years at Wal-Mart in the 1990s. She and Eldon enjoyed travelling, especially to Branson, MO, and attended many shows at the Charlotte Performing Arts Center. She was a longtime member of First Baptist Church in Charlotte. Chere was talented with home crafts, and knit many afghan quilts she leaves behind to comfort her family. She was an avid MSU fan, enjoying the football season, but loved the basketball season and it was important to time your calls around her nightly “Wheel Of Fortune” TV game. Soon after Eldon’s death, Chere moved to Hope Landing, where she enjoyed the comfort and care of her community there in her last years. Chere was predeceased by her husband, Eldon Dymond in 2007; her first husband, Robert Reynolds in 1986. She is survived by her step-children, Steven Dymond, Claudia Bartlett, and Matthew (Christie) Dymond; and her step-grandchildren and great-grandchildren. Friends and family are encouraged to support Chere’s family by sharing memories on her tribute page at www.prayfuneral.com. A private graveside will take place at Bosworth Cemetery, and an outdoor Celebration of Life will take place at a later date. Memorial contributions are suggested to SIREN Eaton Shelter in Charlotte. The family is in the care of Pray Funeral Home.

Chere Lynn Dymond, 76, of Charlotte, died Wednesday, January 12, 2022 in Lansing. Chere was born May 7, 1945, in Olivet, MI. She graduated from Olivet High School and married Robert Reynolds and the two worked alongside each other painting... View Obituary & Service Information

The family of Chere Lynn Dymond created this Life Tributes page to make it easy to share your memories.

Send flowers to the Dymond family.