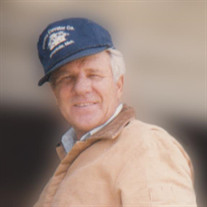 Dale "Sonny" Kenneth Foote, Jr., of Vermontville, Michigan, died on January 17, 2020. Dale was born on February 4, 1929 to Dale K. and Irene (Frank) Foote. Dale lived a simple life and was proud of the farm work that he did and the improvements that he made to his land throughout his life. He loved working with his tractor: planting seed and watching his crops grow. He also loved driving his semi across the country, which he did for 30 years before retiring in 1992 from Fleet Carrier of Pontiac, MI. At home he loved fishing in his pond with his granddaughter, Shamarr. Westerns were a favorite of his, especially anything with Clint Eastwood. He could watch them over and over and never tire of them. He truly was a “cowboy at heart.” Dale enlisted in the Navy in 1946 serving two years on the east coast. In 1948, he married Patricia Dickey, divorcing in 1953. In 1968 he married Lorraine Grzadzinski. Dale was a proud member of the American Legion, Fraternal Order of the Eagles, and the N.R.A. Dale is survived by his son, Ken (Anne) Foote; daughter, Charlotte Garlinger and Deborah ( Jack) Vineyard; step-daughters, Jodie (Steve) Kilpatrick and Tammi Gearhart; brothers, Raymond (Mary) Foote and Edwin (Alice) Foote; sister, Phyllis (Leo) Trumble; 4 grandchildren, 2 step-grandchildren, 9 great-grandchildren, 1 step-great-grandchild and numerous nieces and nephews. Dale was preceded in death by his parents; his wife, Lorraine; sisters, Barbara Hess and Pat Sayles; brother-in-law, Kendal Sayles; son-in-law, Jerry Garlinger, and step-daughter, Lauren Coddington. The family will receive visitors at Pray Funeral HomeWednesday, January 22, 2020 from 6-8 p.m. Funeral services will be at 11 a.m. on Thursday, January 23, 2020 at Pray Funeral Home in Charlotte with Pastor Kevin Barker officiating. Interment will follow at Woodlawn Cemetery, Vermontville. Friends and family are encouraged to share memories of Dale on his Tribute Page at www.PrayFuneral.com.

Dale "Sonny" Kenneth Foote, Jr., of Vermontville, Michigan, died on January 17, 2020. Dale was born on February 4, 1929 to Dale K. and Irene (Frank) Foote. Dale lived a simple life and was proud of the farm work that he did and the improvements... View Obituary & Service Information

The family of Dale Kenneth Foote Jr. created this Life Tributes page to make it easy to share your memories.

Send flowers to the Foote family.