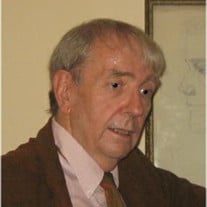 Daniel Robert Campbell, PhD, scholar, Eagle Scout, historian, of Okemos, died January 30, 2021. Dan, 77, was born on December 10, 1943 in Battle Creek, Michigan, to George Edson and Beatrice Elizabeth (Struble) Campbell. Dan was an avid student of many topics. He had a passion for words and how they fit together, fashioning tales and sharing history. Growing up on Pine Lake he enjoyed searching for arrowheads, fishing, water-skiing, boating and swimming. Dan was active in the scouting program and earned his own Eagle Scout Award as well as helping other scouts achieve theirs. Dan enjoyed being part of the theater group in Olivet. He graduated as valedictorian of his 1962 class in Olivet, earned his Bachelor of Arts Degree in Literature from U of M, M.A. in History from the University of South Florida, PhD in History from MSU. He had several occupations through the years including Emergency Room staff, and he owned an antique shop in Beverly, Massachusetts. He authored and published two books and assisted with his mother’s genealogy book about her family. He would have loved to had a best-seller in his biography. Most currently he would be remembered as Adjunct Professor of Writing and History at Lansing Community College. He enjoyed research projects and then writing about them, Michigan Indian Folklore, genealogy (especially Campbell and Struble lineage), and astronomy. One of his proudest moments was winning a creative writing contest for a short story. He won enough money to purchase his first car. Dan is survived by his brothers, David Campbell, Gerry (Shirley) Campbell, and Brian (Sharon)Campbell; sister-in-law, Wilma Campbell; many nieces and nephews as well as great-nieces and nephews and many cousins. He was predeceased by his parents, and brother, Norman Campbell. There will be a private graveside service with a memorial gathering in the spring to be determined. Friends and family are encouraged to share memories of Dan on his Tribute Page at www.PrayFuneral.com. The family is in the care of Pray Funeral Home, Charlotte.

The family of Daniel Robert Campbell created this Life Tributes page to make it easy to share your memories.

Send flowers to the Campbell family.