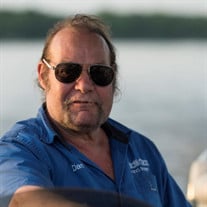 Daniel Lee Smith, age 62, passed away on March 10, 2020, after a short battle with cancer. Daniel was born on July 15, 1957, in Lansing, Michigan. He attended Everett High School, graduating in 1975. Upon graduation he served his country by joining the Navy and spent two years stationed out of Norfolk, Virginia. After serving, he returned to Michigan where he attended Lansing Community College, earning a degree in Engineering. Daniel used his Engineering degree working in the lumber industry and eventually found employment at Sieloff Glass and Screen, a window installation business in Lansing, Michigan. In 2008, he bought Sieloff and became a business owner for many years, providing jobs and services to the Lansing community until his recent retirement in 2019. In 1991 he married Edith and they welcomed two children, Daniel Junior and Dawn, joining Edith's children from a previous marriage, Israel and Joshua. As his family grew, he never wavered from crafting and building, as he was constantly creating furniture, gardens, and many other crafts. Dan greatly enjoyed strong debates and conversations, which allowed him to share his vast knowledge. He was intrinsically talented and could create elaborate pieces of furniture, household projects, and even beautiful gingerbread houses. Dan was well known for his humor, adventurous attitude, and intense commitment to hard work. His desire to learn resulted in teaching himself to play the piano, cooking, photography, gardening, and learning to sail…which he often did with his father, Raymond. There was no task big or small that Dan couldn't do, from figuring out a mechanism to self-feed his cats, to creating a picnic table with a built-in lazy Susan, Dan never stopped exploring and creating. Daniel leaves behind his wife, Julie, who has been by his side for over 12 years; her children, Joshua and Angela (Michael); his children from wife Edith (d.2003), Danny Jr. and Dawn; and his step-children, Israel (Shannon) and Joshua. He will also be missed deeply by his many grandchildren; his parents, Raymond and Judy Smith; siblings, Teresa Foster (Vickie d. 2019), Steven (Bobbi) Smith, Diane Kippen, Leslie (Jeffrey d. 2017) Dull, Debra (Holt d. 2015) Chater, Laurie (Randy) Hoyt, Sandra Wolfe; and many nieces and nephews. Friends are encouraged to support Daniel's family at visitation and funeral services. Funeral services are Tuesday, March 17, 3:00 PM at Pray Funeral Home in Charlotte with Laura Cooper officiating. Visitation is two hours prior to the service, 1-3:00 PM on Tuesday, March 17. Friends and family are encouraged to share memories of Daniel on his Tribute Page at www.PrayFuneral.com. The family is in the care of Pray Funeral Home, Charlotte. The funeral service will be webcast so you may watch it from any computer, smartphone, or mobile device that has internet access. Log on to www.prayfuneral.com, click on Dan’s tribute, and then click on Photos & Videos. Just prior to the beginning of the service, a link will appear on this page to watch the webcast.

Daniel Lee Smith, age 62, passed away on March 10, 2020, after a short battle with cancer. Daniel was born on July 15, 1957, in Lansing, Michigan. He attended Everett High School, graduating in 1975. Upon graduation he served his country... View Obituary & Service Information

The family of Daniel Lee Smith created this Life Tributes page to make it easy to share your memories.

Send flowers to the Smith family.