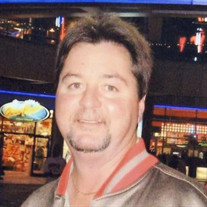 David Jeffrey Bayly, Sr., died unexpectedly on October 22, 2021 in North Carolina. David was born July 10, 1963 in Troy, NY, the son of Barry J. and Catherine Mildred (Brennan) Bayly. He grew up in a large Irish family, his father being one of 14. In fact, David's grandfather was actually consulted about cross-country family trips for the making of the film Cheaper by the Dozen. David spent many of his early years living in Florida, where he graduated high school in St. Petersburg, attended the University of Florida Gainsville, and eventually owned his own auto-detailing business. In 1991, David moved to Michigan, where he worked at Spartan Motors in Charlotte for 24 years, retiring in 2016. On the side, he and Jean owned and operated Bayly's Restaurant and Lounge in downtown Charlotte for 9 years. David loved golf. He was a founding member of the Bayly Cup in 1992, a tournament played every year on several golf courses in North Carolina. This year marks its 30th anniversary trip. He also founded the Jeff Ripley Memorial Golf Tournament. Throughout the years, David enjoyed time spent with his family, and a lifetime of cheering on the Tampa Bay Buccaneers. GO BUCS! David is survived by his wife, Jean Ann Bayly; son, David Bayly, Jr.; daughter, Nike Bayly; step-children, Eric (Stacey) Reed, Christopher Reed, Teresa Reed, and Lacie (Justin) Emery; 14 grandchildren and step-grandchildren; 1 great-grandchild; siblings, Barry (Denise) Bayly, Chris (Kerrie) Bayly, Matthew (Patricia) Bayly; Kaylyn (Liz Collins) Bayly, and James (Julie) Bayly; several nieces and nephews; and former wife, Kristina Fetterman. He was predeceased by his parents; brother, Tim Bayly; and sister, Melanie Thompson. Friends and family are encouraged to support David's family by attending services or sharing memories on his tribute page at www.prayfuneral.com. Funeral services will be held at 11:00 a.m. on Friday, October 29, 2021 at Pray Funeral Home, Charlotte. Visitation will be from 10:00 - 11:00 a.m., an hour prior to the service. Memorial contributions are suggested to the National Kidney Foundation. The family is in the care of Pray Funeral Home.

David Jeffrey Bayly, Sr., died unexpectedly on October 22, 2021 in North Carolina. David was born July 10, 1963 in Troy, NY, the son of Barry J. and Catherine Mildred (Brennan) Bayly. He grew up in a large Irish family, his father being one... View Obituary & Service Information

The family of David Jeffrey Bayly created this Life Tributes page to make it easy to share your memories.

Send flowers to the Bayly family.