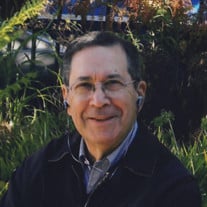 Dr. Donald Falik, beloved dentist of the Charlotte, MI community, died unexpectedly in an airplane accident on December 30, 2018. Don, age 72, was born April 30, 1946 in Detroit to Chazkel and Florence (Katzin) Falik. In 1969 he married Mary “Lee” Park. Their adventures together over the next 49 years were many. Don lived life to the fullest, and gave of himself often to help others. Dentistry, flying, and car collecting were Don’s favorite activities in life. He found a way to blend them by flying patients and friends in need of transportation or a fun experience. Don’s love of dentistry began when he was a child. He graduated from Cass Tech in Detroit, attended MSU, and graduated from the University of Detroit Dental School in 1970. Shortly thereafter, he served his country in the Navy Dental Corps. After an honorable discharge, he and his family moved to Charlotte in the Spring of 1972, where he began his dental practice. Weekend, midnight, and holiday emergencies were not uncommon for Dr. Falik. He often visited hospitals and nursing homes to care for his patients. After he received his pilot’s license in 1993, any opportunity to fly made Don happy. He would take off at the drop of a hat, if the opportunity arose and weather conditions permitted. Don had a love of mechanics, which led him into a love of orthodontics. His work was a hobby, and his patients and staff were part of the extended family. Don and his wife Lee loved to travel, taking several trips to Mexico and Europe. During one visit to Mexico, he provided dental services in very primitive conditions to school children. A devoted family man, Don was very proud of his wife, sons, and especially adored his two darling granddaughters. Dr. Don Falik is survived by his loving family: Lee, wife of 49 years; sons, Dr. Robert Falik, Thomas Falik, and Michael (Crystal) Falik; granddaughters, Myla and Riley; brother, Dr. Louis Falik; and sister, Sheila Millman. He was preceded in death by his parents. Friends are encouraged to support the Falik family at visitation and funeral services. Funeral services are Saturday, January 5, 2019, 12:00 Noon at Pray Funeral Home in Charlotte with Rev. David Keller officiating. Visitation is Friday, January 4, 5-8:00 PM, and Saturday, January 5, 10:00 AM – 12:00 Noon at the funeral home. In lieu of flowers, the family suggests memorial contributions to Wings of Mercy or Angel Flight. Friends and family are encouraged to share memories of Don on his tribute page at www.PrayFuneral.com. The family is in the care of Pray Funeral Home, Charlotte.

The family of Dr. Donald Falik created this Life Tributes page to make it easy to share your memories.

Send flowers to the Falik family.