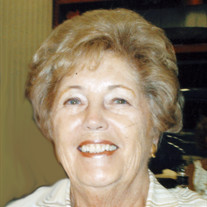 Donna Walker Johnson, 87, a gracious community leader and beloved wife, mother and grandmother, died peacefully on Sunday, May 5, 2019 in Charlotte. Donna was born October 20, 1931, the daughter of Earl and Leona (Smurr) Walker. She graduated from Charlotte High School in 1950 and soon after married her life-long love, Richard "Dick" Johnson on October 5, 1952. The two spent 5 months in Memphis, TN, at a national Hardwood Lumber Grading School, before returning home to work in the Johnson family business, L.L. Johnson Lumber. As a fulltime homemaker and community volunteer, Donna was very busy. She demonstrated to her community the value of service to others and life-long learning. Donna was a member of the General Federation of Women's Club - Charlotte for 63 years and President in 1969-1970. She was co-chairman of the committee that developed the award winning "Charlotte Welcome Sign" which was an award winner at GFWC State Conference. At the State convention they also voted to organize the Mobile Meals of Charlotte program in 1970. She remained engaged with GFWC long after her leadership, attending town-hall meetings and supporting other members in their roles. Donna was a 4-H leader for 9 years helping to teach many young ladies the fine art of sewing. Along with her husband Dick, Donna was on the Explorer Scout Post 45 advisory board and a Pack 45 Cub Scout Den Leader. Donna also served as past chairman of the conservation club and served on the City of Charlotte Park Board, where she was instrumental in adopting and maintaining flower beds through town. She also received a year of art training at MSU Kresge Art Museum, where she then served 12 years as a docent. Donna attended First Congregational Church, taught Sunday school class, and was Women's Fellowship President for 30 years as a member of the Memorial Committee for over 10 years. She also served the church as the Holiday Bazaar chairperson and helped with the Bazaar luncheon every year. She received the Ernie Nash award for Community Service, and in 2014, was recognized for her life's achievements as the recipient of the Charlotte Rotary Clubs prestigious Clyde A. Fulton award. Despite all of these accolades, she remained humble and always focused on others first. At home, Donna's crafts included decoupage (for which she won first at the State GFWC convention), quilling, candle making, making Artemisia wreaths, card club, and silk ribbon projects. She also collected cardinals, drummer boys and Amanda Bricker flowers. Donna upheld and developed many family traditions throughout the years. The 2 PM Christmas Dinner was always set beautifully with a centerpiece, china, silver and all the trimmings. She made special Christmas Tree-shaped coffee cakes to give as gifts, along with countless plates of goodies, including her Chex Mix treats, she and Dick would so thoughtfully deliver to friends and family. Donna was a fabulous cook and enjoyed time in the kitchen whether at home or on the road in their motor home. When traveling, it wasn't unusual for Dick and Donna to pull into the driveway with dinner ready to share with their weekend hosts. Some of the family's favorites were Donna's Gooey Rolls. Above all, Donna loved her family. She is survived by her husband of 66 years, Richard Johnson; their children, Mark (Becky Gemalsky) Johnson, Sherry Guzy, and Tim (Sally) Johnson; 8 grandchildren, Brooke (Kyle) Stevenson, Noah Johnson, Dara (Koky) Sisoura, Meg (Mark) Robinton, Melissa Guzy, Vaughn (Michele) Johnson, and Connor and Tanner Johnson; 9 great-grandchildren, Emma and Hailey Stevenson, Carson Elizabeth, Beckett, and Reagan Sisoura, Ellie, Cooper and William Robinton, and Katharine Grace Johnson; brother, Larry Walker; and many nieces and nephews. She is predeceased by her sisters, Shirley VanAuker and Joyce Johnson. Funeral services will be held at 1:00 p.m. on Friday, May 10, 2019 at the First Congregational Church of Charlotte with Pastor Curtis Demars-Johnson officiating. Visitation will be from 2:00 - 4:00 and 6:00 - 8:00 p.m. on Thursday, May 9, 2019 at Pray Funeral Home, Charlotte. Memorial donations may be made to the First Congregational Church of Charlotte, Kresge Art Museum, or Eaton Community Palliative Care. Friends and family are encouraged to share memories of Donna on her Tribute Page at www.PrayFuneral.com. The family is in the care of Pray Funeral Home, Charlotte.

The family of Donna Walker Johnson created this Life Tributes page to make it easy to share your memories.

Send flowers to the Johnson family.