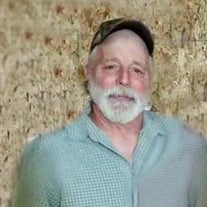 Douglas Ira Cuatt, 64, passed away January 14, 2021 in his home. He was born in Albion, MI on July 17, 1956 to Richard F. and Grace M. (Snow) Cuatt. Doug was a graduate of Springport High School class of 1974. He met the love of his life, Dianne, in 1983 and never looked back. He was a wonderful man, a loving husband, and a devoted father and later grandfather. Always willing to help in any situation, he would always teach you anything and everything he could. Doug was a very strong-minded person that wasn't afraid to tell you what was needed. To many he was intimidating, but to his family and friends he was a man with a heart of gold. Providing for his family was always a top priority for Doug, doing anything and everything possible to provide, often working multiples jobs with long hours. In his spare time, Doug loved many things in life such as hunting, fishing, camping, and spending time at the family cabin to name just a few. However, the thing he loved the most was his family and spending time with them. Doug fought a long hard battle with cancer and never stopped fighting. Doug passed peacefully with his wife and family right by his side. He is survived by his wife of 35 years, Dianne; sons, Christopher D. Cuatt and Michael L. (Brook) Cuatt; his five grandchildren, Christopher Jr., Kayla, Adam, Delainey, and Greysen Cuatt; and many nieces and nephews. He was preceded in death by his parents, Richard F. and Grace M. (Snow) Cuatt; and his three brothers, Jim, Robert, and Wesley Cuatt. Friends are encouraged to support Doug's family by sharing memories of him on his Tribute Page at www.PrayFuneral.com. A celebration of life will be held at a later date. In lieu of flowers, the family suggests donations be sent to the Herbert Herman Cancer Center, Lansing, MI in Douglas Cuatt's memory. The family is in the care of Pray Funeral Home, Charlotte.

The family of Douglas Ira Cuatt created this Life Tributes page to make it easy to share your memories.

Send flowers to the Cuatt family.