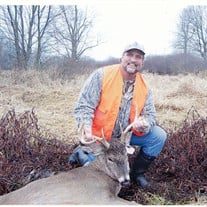 Eric James Stanton of Charlotte, a loving, supportive man that took others in like they were his own family, died unexpectedly November 25, 2019 at the age of 60. Born June 1, 1959 in Eaton Rapids to James and Vonda (Thompson) Stanton, Eric grew up learning to love farming and cooking from his grandma and grandpa Thompson as wonderful role models in his life. He married the love of his life, Carrie LeAnn Bailey on September 16, 1983, and together they raised three children and built their own home. Eric was a carpenter with Carpenters Union, working all over the state of Michigan until his retirement in March of 2019. With a true love of the outdoors, Eric enjoyed hunting (he never missed an opening day of deer season), fishing with trips to Drummond Island as often as he could, and had a real green thumb for "yard farming" with his very large garden. Family was everything to Eric…he put family first and never missed a sporting event or activity of his children or grandchildren. Christmas always had special memories for the family, his mom started reading a special Christmas story to Eric at the age of 2 and did so every year thereafter. Eric is survived by his children, Derrick, Deven (Bridgette Gallagher), Megan Stanton, and Zach (Mindy) Holbrook; grandchildren, Ayden, Hoyt, and Wyatt Stanton; mom, Vonda Stanton; siblings, Mark (Betsy) Stanton and Karen Stults; and many brothers and sisters-in-law and nieces and nephews. He was preceded in death by his wife, Carrie in 2005; his father, James; and his grandparents. Friends are encouraged to support Eric's family at visitation and memorial services. Memorial services are Monday, December 2, 2019 5:00 PM at Pray Funeral Home in Charlotte with Daniel O. Sowles officiating. Visitation is Sunday, December 1, 5-8:00 PM at the funeral home. If desired, the family suggests memorial contributions to the American Cancer Society. Friends and family are asked to share memories of Eric on his Tribute Page at www.PrayFuneral.com. The family is in the care of Pray Funeral Home, Charlotte.

Eric James Stanton of Charlotte, a loving, supportive man that took others in like they were his own family, died unexpectedly November 25, 2019 at the age of 60. Born June 1, 1959 in Eaton Rapids to James and Vonda (Thompson) Stanton, Eric... View Obituary & Service Information

The family of Eric James Stanton created this Life Tributes page to make it easy to share your memories.

Eric James Stanton of Charlotte, a loving, supportive man that...

Send flowers to the Stanton family.