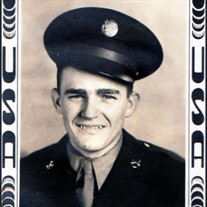 George Willis Riddle, 96, of Charlotte, died peacefully on Sunday, November 7, 2021, surrounded by his family. George was born August 7, 1925 in Charlotte, the son of Grover Cleveland and Mabel Louise (Summers) Riddle. George was drafted into the U.S. Army during his junior year of high school, and shipped out in 1943 to serve in the 82nd Airborne in the European theater of WWII. Upon his return from the war in 1946, he went back to Charlotte High School and graduated in 1946. After school, he went to work part-time at the Post Office and Aluminum Extrusion. He later went to Carefree, rising to Plant Manager before his retirement in 1985. He and his wife, Wilma "Billy" Riddle, enjoyed traveling all over the world, marking each destination with a peg on the world map at home. Years later, he and his companion, Wanda, spent winters in Englewood, FL, where George loved sunbathing, a craving he enjoyed all the way into his last days. In his last years, he enjoyed ice cream on Fridays with his granddaughter, and time spent close to family. George is survived by his daughter, Denise Riddle; son, Geoffrey (Diana) Riddle; daughter-in-law, Darlene Riddle; 4 grandchildren, Kara Riddle, Kaci Riddle, Nicole (Chad) Guilford, and Amanda (Bobby) Decker; 9 great-grandchildren; nieces and nephews; and his long-time companion, Wanda Wells. He was predeceased by his wife, Wilma "Billy" (Amick) Riddle; son, George Willis Riddle, Jr.; and sisters, Eunice Wells and Jean Oberlin. Friends and family are encouraged to support George's family by attending services or sharing memories on his tribute page at www.prayfuneral.com. A Memorial Service will be held at 1:00 p.m. on Friday, November 12, 2021 at Pray Funeral Home with Laura Cooper officiating. Visitation will be one hour prior to the service. Interment will take place in Maple Hill Cemetery, Charlotte. The funeral will be webcast so you may watch it from any computer, smartphone, or mobile device that has internet access. Go to www.prayfuneral.com, click on George's tribute, then click on Photos and Videos from your computer (or Media from your smart phone). Memorial contributions are suggested to Mid-Michigan Hospice. The family is in the care of Pray Funeral Home.

The family of George Willis Riddle created this Life Tributes page to make it easy to share your memories.

Send flowers to the Riddle family.