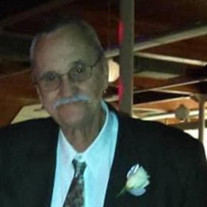 Harold "Roy" Leroy Eitniear, a man known for his sense of humor and commitment to his family, died on Friday, January 21, 2022. Roy, 86, of Potterville, was born August 30, 1935, the son of Freddie and Mazzie (Lamphere) Eitniear. He was a graduate of Potterville High School class of 1954. Following graduation Roy began working for a candy distribution company, Schaefer's Bread Company, and later at General Motors where he worked as a Machine Repairman, for 30 plus years before his retirement. In 1962 Roy mourned the loss of his dear wife, Mary Margaret, who died at the age of 24. Roy would later marry Harriet Durbin who was also a widow. The two created numerous memories together and with their blended family. Roy was a man who loved being outdoors, from camping, bicycling around Europe, canoeing, canoe races, stock car racing, hunting, and also fishing. He enjoyed woodworking, his children said he could make anything he set his mind too. The family camping trips were a big deal during the summer. Roy had constructed a trailer that would haul the supplies, canoes, and rowboats. Roy and Harriet attended Clown school, and together brightened other people's day with their clowning. Many will remember Roy for the stories that he told; he was one that could talk your ear off. Above all, Roy adored his family and his years with General Motors. Roy is survived by his wife, Harriet; children, Terri (Gary) Ross, Robin (Michael) McCain, Kim (Richard) Artibee, Cathy (Michael) Larson, Laurie Savage, Sally (Mark) Coleman; grandchildren, Jennifer Crane, Lisa Volz, Keith Ross, Deja Chavez, Staci Lowe, Jason Artibee, Matthew McCain, Joseph McCain, Rachel Hayes, Ann Larson, Rebecca Coleman, Tyler Larson, Bailey Coleman; 12 great-grandchildren; sister, Phyllis Ruth Eitniear; sister-in-law, Diana Boyce. He was predeceased by his first wife, Mary Margaret; brother, Phillip Eitniear; son-in-law, Theo Savage; parents; and step father, Vern Snyder Friends are encouraged to support Roy's family by sharing memories on his Tribute Page at www.prayfuneral.com. A private visitation will be held at this time. At a later date the family will hold a Celebration of Life for Roy. If desired, the family suggests memorial contributions to St. Jude Children's Research Hospital. The family is in the care of Pray Funeral Home, Charlotte.

Harold "Roy" Leroy Eitniear, a man known for his sense of humor and commitment to his family, died on Friday, January 21, 2022. Roy, 86, of Potterville, was born August 30, 1935, the son of Freddie and Mazzie (Lamphere) Eitniear. He was a graduate... View Obituary & Service Information

The family of Harold Eitniear created this Life Tributes page to make it easy to share your memories.

Harold &quot;Roy&quot; Leroy Eitniear, a man known for his sense of humor...

Send flowers to the Eitniear family.