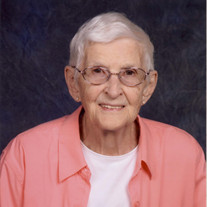 Joan Ann Kerstetter Wilmore, 92 of Charlotte, passed away peacefully November 12, 2020 at her home with family. Joan was born in Lansing, MI on December 13, 1927, the only child of George and Mabel (Cooper) Kerstetter. George, Mabel and Joan moved to the city of Charlotte when Joan was a small child, to be close to George's parents, who owned the farm on Mulliken Road. In the early 40's they moved to the farm, which at that time had a double house. Joan said many times she thought she had been put in exile, leaving town! She soon became a part of farm and country life, and met the neighbor boy, Norm Wilmore, when he came to work for her family. We all know where that led, before Norm spent time in the service, they were engaged and after his return, they married on July 2, 1948. They rented a farm on Vermontville Highway before purchasing and moving to the farm on Shaytown Road in Vermontville. This is where they milked cows, farmed, and raised a family of five, Connie, Karen, Vicki, Pam, and Kirby. In 1977, and after most of the kids had moved out and moved on, Joan and Norman moved back to the beloved home of her parents, grandparents, and great-grandparents on Mulliken Road. Joan re-designed and remodeled the house, became a HGB volunteer (which she loved doing), and was frequently seen with the McDonald's coffee club where she felt very much a part of being a Charlotte girl! Joan had many friends that she went to school with, church with, and knew from being a part of the greater Charlotte community. Over the years she worked at McNamara's Drug Store, Wilcox-Gay, and Barber State Bank, and was a member of Gresham United Methodist Church where she served on many boards and committees. Joan lived a life of service to her family, church, and community. Her faith in God sustained her through many ups and downs in life, and her family know she is now walking hand-in-hand with her husband, Norman, in Heaven. Memories of Joan will be cherished by her family, including her children, Connie (Chuck) Corbin, Karen Scott and friend Chuck O'Connell, Pam (Fred) Todd, and Kirby (Kate) Wilmore; 9 grandchildren; and 8 great-grandchildren. She was preceded in death by her husband of 65 years, Norman in 2013; her daughter, Vicki Watson; and grandson, Chad Gingrich. Friends are encouraged to support Joan's family by sharing memories on her Tribute Page at www.PrayFuneral.com . The family will have a private graveside service. There will be a webcast for the public made available by 1:00 p.m. on Monday, November 16, 2020. You may watch it from any computer, smartphone, or mobile device that has internet access. Go to www.prayfuneral.com, click on Joan's tribute, then click on Photos and Videos from your computer (or Media from your smart phone). Just prior to the beginning of the service, a link will appear on this page to watch the webcast. In 2021 the family plans to have a Celebration of Life for Joan once it is safe to do so. If desired the family suggests memorial contributions to the Gresham United Methodist Church. The family is in the care of Pray Funeral Home, Charlotte.

Joan Ann Kerstetter Wilmore, 92 of Charlotte, passed away peacefully November 12, 2020 at her home with family. Joan was born in Lansing, MI on December 13, 1927, the only child of George and Mabel (Cooper) Kerstetter. George, Mabel and Joan... View Obituary & Service Information

The family of Joan Ann Wilmore created this Life Tributes page to make it easy to share your memories.

Send flowers to the Wilmore family.